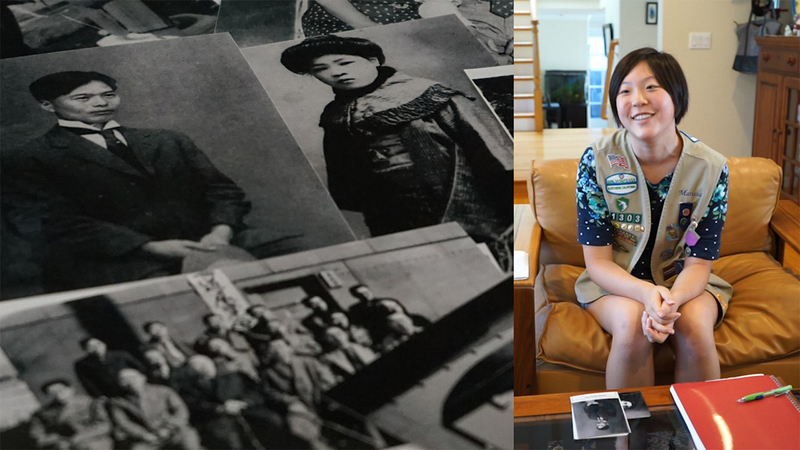 SAN JOSE, Calif. (KGO) -- A quest to earn a gold star has set a San Jose Girl Scout on a journey into a past that is often forgotten.

Marissa S., a high school senior, has been a girl scout since the first grade. Over time she earned a bronze star and then a silver star.

But last year, she set out to earn a gold star by researching the internment of 120,000 Japanese and Japanese-Americans during World War II.

The gold star is the highest award a Girl Scout can earn. Only about 5% of Girl Scouts get one.

"I thought it would be good to complete the award for college applications," said Marissa, who prefers not to give out her last name as part of a Girl Scout internet safety pledge.

Japanese internment is a subject Marissa barely learned about in school. To find out more, she first contacted the Angel Island Immigration Station, where 700 people of Japanese ancestry from Hawaii and the Bay Area were held briefly before they were sent to camps throughout the country.

That's how she met Grant Din, a volunteer genealogist for the Immigrant Voices exhibit.

"Pearl Harbor happened in the day, and by that evening, hundreds of Japanese were arrested. Very few people know Angel Island was used to house some of them during WWII," said Din, who volunteered to oversee Marissa's project.

They gave her a list of people incarcerated at Angel Island and Marissa got to work.

"I picked the very last name on the list. That happened to be Wakijiro Yuki," explained Marissa.

She went on Ancestry.com to find out about his children and then researched obituaries to find his living descendants.

"It turns out one of his grandsons was actually a reverend at a Buddhist temple not far from here," said Marissa. She tracked him down and set him an email.

It was Rev. Jay Shinseki, whose grandfather had lived for years in the U.S. when he was detained during WWII.

"My grandfather was picked up by the FBI right after the bombing of Pearl Harbor. The FBI stopped my grandmother from packing his shaving kit because they thought it could be a weapon. It was quite traumatic for the family," said Shinseki.

A2: One of the most important things we can learn from storytelling is our history. Because those who fail to learn from history are destined to repeat it. At AIISF, we try to uplift the complex history of #immigration through #AngelIsland #APAHM2020 #DareToBeBrave @AngelIslandSP pic.twitter.com/TyGF1JguhX

Marissa interviewed Shinseki and his cousin Joyce Kuwada about their grandfather. She then wrote an article for Immigrant Voices about his life. But she didn't stop there.

She picked another name on the list. This time she hand wrote letters to several people who could potentially be relatives.

"I was so happy when they called me and said they could help with my project." Marissa interviewed the relatives of Hikoshichi Higuchi and wrote an article about his ordeal during WWII.

She then tracked down more families. Her work surprised Din.

"She told me I got in touch with one family and then another. And then there was four. And I said wow. We had a few families come to us but we didn't make that kind of effort to track them down," explained Din.

Marissa then decided to go further. She set up her own website and made videos to teach others about the Japanese incarceration. Now, she is creating a traveling exhibit for Angel Island that will move around different historical sites across the country. It consists of four banners that tell some of the personal stories she uncovered and explain the history of Japanese internment.

"It is wonderful that Marissa is telling these stories," said Rosalyn Tonai, executive director of the National Japanese American Historical Society in San Francisco. "It is important to to tell the stories as you see the truth to be. Truth is power and it is important to give people that power.'

Tonai sees parallels between the unjust incarceration of Japanese and current federal immigration policies that result in the separation of immigrant families seeking refuge in the United States. So does Marissa.

"I want to teach people what happened to the Japanese because that is a prime example of what is going to happen to other people if this continues. It is up to us to put the brakes on it before it gets out of hand," said Marissa, who is now hosting webinars on her website to teach others about this dark part of American history. She is also creating lesson plans for schools so teachers can focus more time on Japanese internment.

"It is like my little child. I am watching this grow from my little idea into this huge big reality that I didn't even think I could do until I started doing it."