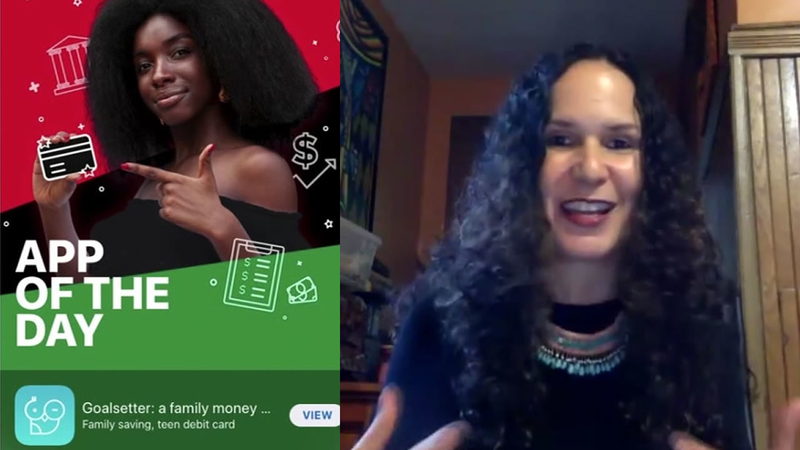 On Wednesday, Apple is featuring Goalsetter as the "App of the Day" in the App Store.

Van Court was born in East Oakland and graduated from Stanford University with two engineering degrees.

She's also a former Nickelodeon executive so she knows the language of kids. That's where she got the idea for Goalsetter --from her own daughter who asked for an investment account for her ninth birthday.

Her initial idea for the app was eventually paired with a higher calling: closing the wealth gap between Black and brown families in America and white families.

Goalsetter hit the app store in 2018 and has been gaining popularity ever since by teaching kids how to save and the fundamentals of financial literacy in a language they can understand.

"It allows them to learn financial education, all through means and GIFs from hip-hop artists and social media influencers and YouTube personalities, so it's fun for everyone in the family," she said.

Goalsetter recently launched a teen debit card called Cashola that is tied to the app. In order for kids to spend the money pre-loaded onto the app by parents or gifted by relatives or friends, they must first complete a weekly financial literacy quiz.

"If I am behind on a certain amount of quizzes I can't really use my card," said 14-year-old Chloe Beckford.

Terri-Ann Beckford downloaded the app for her daughter and herself two months ago and said she's already seeing the payoff.

"As a parent, you're thinking, 'Is my child ready to learn about taxes?' But the app is actually helping with that so we can have some more meaningful dialogue about saving and spending," said Beckford.

The app is designed for kids of all ages: from cradle to graduation, but Van Court said she's also heard from a number of parents who have benefited from the app. Some have used it to create a rainy day savings fund.

The app also allows parents to pay out a child's allowance in the app and family members can send a monetary gift directly to a child's savings account instead of purchasing a gift card to a store that mainly encourages thoughtless spending.

Now the app is working on expanding access to those who need it most.

RELATED: What is Juneteenth? History, celebrations, future of the holiday celebrating the end of slavery

On Juneteenth, Van Court launched the 1 Million Black Kids Saving Initiative to accomplish just that. The company is partnering with businesses and community groups, like the East Oakland Youth Development Center where savings accounts were launched 100 kids.

"We can put $40 into an account for those kids, as a nod to 40 acres and mule, and help those kids on their path to financial independence and financial freedom," said Van Court.

The lessons are sticking for 14-year-old Chloe, she said two of the most memorable teachings were on compound interest and diversification.

"When you're diversifying your stock portfolio you can't just diversify the companies that you're investing in but you also need to diversify the industries that those companies are from," said Beckford.

"Where the payoff happens is when I see kids like that, whose lives are being changed," said Van Court.

Despite a number of startups and tech companies laying off employees during the pandemic Goalsetter is actually expanding its team.

RELATED: Coronavirus pandemic has you looking for a job? Indeed can help

Goalsetter is actively seeking companies to partner with to invest seed money for savings accounts to achieve the goal of the 1 Million Black Kids Saving Initiative. If interested, you can contact the company at hello@Goalsetter.co.

The app is free to download. Users are asked to pay a monthly fee of what they can afford to pay.