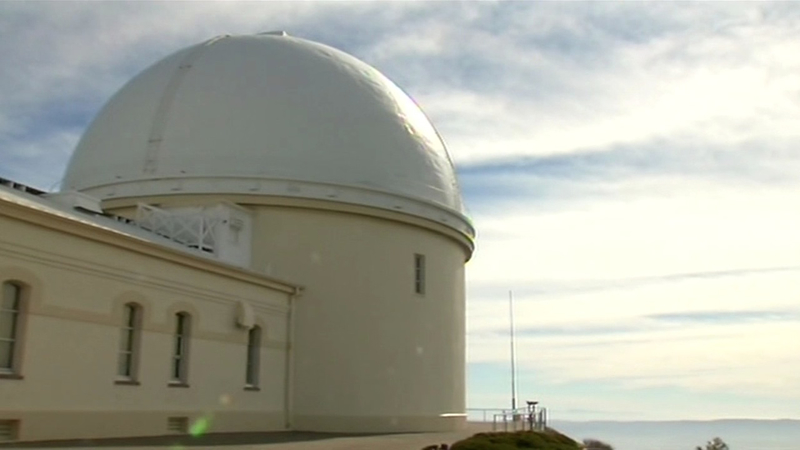 SAN JOSE, Calif. (KGO) -- A Bay Area landmark got a much needed financial boost from one of the region's biggest companies on Tuesday. A contribution from tech giant Google will help keep science moving forward at the Lick Observatory on Mount Hamilton.

"It's amazing," said Fremont resident Ed Middlesworgh. "You see San Jose on this side, you can see the Sierras on the other side."

Middlesworgh and his training partner, Campbell resident Kirsten McDaniel, biked for miles up to the Lick Observatory.

"It brings back memories," she said. "You know, I barely remember being in the station wagon, feeling like my father was going to drop off the edge of the road."

The road to get there is long and winding. Much like the journey the observatory has been through since opening in 1888.

The Lick Observatory atop Mount Hamilton is seen in this historic photo.

On a clear day, you can see downtown San Jose from the observatory. There are actually four telescopes that are currently in operation on a nightly basis, being used for scientific research.

Owned and operated by the University of California system, there was talk about funding being completely cut, not too long ago.

Staff has been reduced in recent years and it now runs on a very limited budget. Elinor Gates has been an astronomer there for 17 years.

"I study the black holes at the centers of distant galaxies," she said. "I also design new instruments so that we can view the universe in new ways with our telescopes."

But Tuesday brought a big announcement from Google -- the company is donating $1 million over the next two years, which will help augment the $1.5 million a year the observatory currently gets from the UC system.

It's still short of the $2.5 million they actually need. But Gates hopes that it will spur even more donations down the road.

"It gets kids excited about science," she said. "And it is those kids and their interest in science and engineering and math that will lead to the future innovators."

"It's just great that a facility like this has contributed so much for so long," Middlesworgh said. "It is really a great place for people to come to learn about astronomy, and it's so close."