KGO
By Leslie Brinkley
SACRAMENTO (KGO) -- With a new state budget now on the table, Governor Gavin Newsom said affordability and homelessness are the most pressing issues facing California.

ABC7 news reporter Leslie Brinkley sat down with the governor on Friday to ask him one-on-one about the issues we care about most in the Bay Area.

The governor says last year's state budget gave an additional $650 million to cities and counties to address homelessness and the new budget will add another $750 million. And he said dramatic changes will finally be noticeable across the Bay Area in the coming weeks.

The governor said, "You're going to see state properties taken over for temporary facilities and medical tents. We're going to bring out quite literally FEMA trailers, trailers for emergencies, to temporarily house people but triage them through medical tents and medical units," Governor Newsom said.

"We will bring strike teams from the state, social service teams from every discipline, to make sure people are connecting every single dot and we're going to start addressing big encampments, particularly on Caltrans properties," he said.

Governor Newsom said that one controversial bill, SB 50, which mandates local governments build more housing along transportation corridors, would be in the middle of the discussion for the next six months and says it's imperative to get something big happening.

He said the state has a $5.6 billion surplus which runs counter to the social media attacks targeted on the governor by the President of the United States.

"There's no doubt we are the most un-Trump state in America in terms of values and also prosperity," Governor Newsom said. "We are running record surpluses. He's running record deficits. We are paying down unfunded pension liabilities by $9.1 billion that we announced in our new budget. We have record low unemployment. His numbers on the federal level are disproportionate because of California's success."

Here's everything allowed to reopen in CA 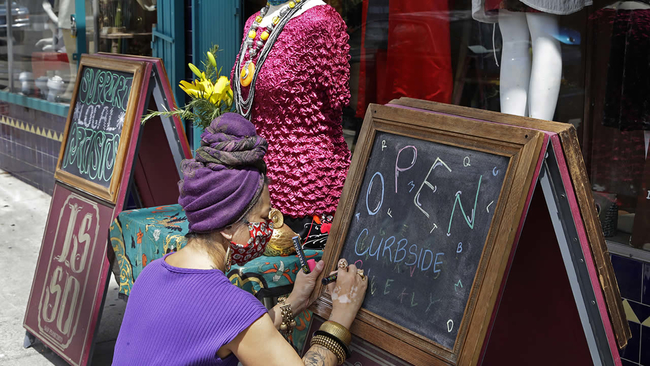 Reopening CA: Here's what we know and what comes next