The San Francisco 49ers and some brave fans have arrived in Green Bay Thursday, where temperatures are well below zero.
KGO
By J.R. Stone 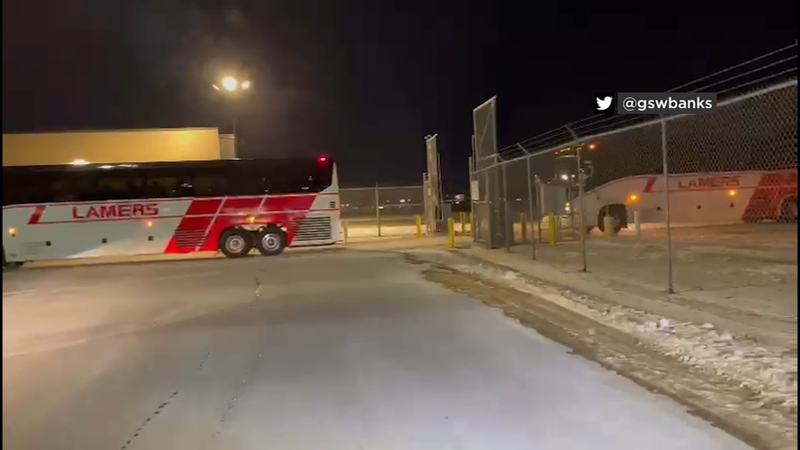 The team arrived in Green Bay just after 8 p.m. California time, and some 49ers fans were there to watch and wave - They're also talking quite a bit about how cold it is.

"I don't think I've ever felt this cold to be honest. I've been to Tahoe a few times but this Green Bay cold is a different kind of cold," said die-hard 49ers fan Alex Banks.

Banks arrived in Green Bay Thursday night after flying from Oakland to Phoenix, then to Milwaukee. Banks said he then drove with his girlfriend from Milwaukee to Green Bay.

Fans tell us the 49ers arrived on planes at 8:12 PT, got on their team buses, and headed to the hotel.

As to playing conditions, "It's freezing cold, it's -4 right now and the the weather app says it feels like -8, and it's supposed to get down to -10, so definitely not used to this from the Bay Area," said Banks.

VIDEO: What the 49ers need to do to beat Aaron Rodgers and the Green Bay Packers
EMBED More News Videos

"We officially sold out today. We've already told people bundle up, bring their blankets, you know it might feel like Lambeau to every one of us," said Holly Zielinski with the District 6 venue.

"Eye of the Niner" Rey Pena, known around the globe for his 49ers prosthetic eye, didn't make the trip to Green Bay due to family duties, and the youngest member of his team is already decked out.

"Her name is Alayna, she's 10-months-old, and she has her first Kittle jersey. I bought it for her before she was born," says Pena.

As to what our friend Alex will be wearing at the game, one that could be the coldest of all-time, "Base layer, long-sleeve Niners shirt, Niners sweater, a jersey over that, and then this big snow 49ers jacket, so I'm trying for five layers. Lot of tailgating, lot of boozing, lot of eating so we're gonna have a lot of fun," says Banks.