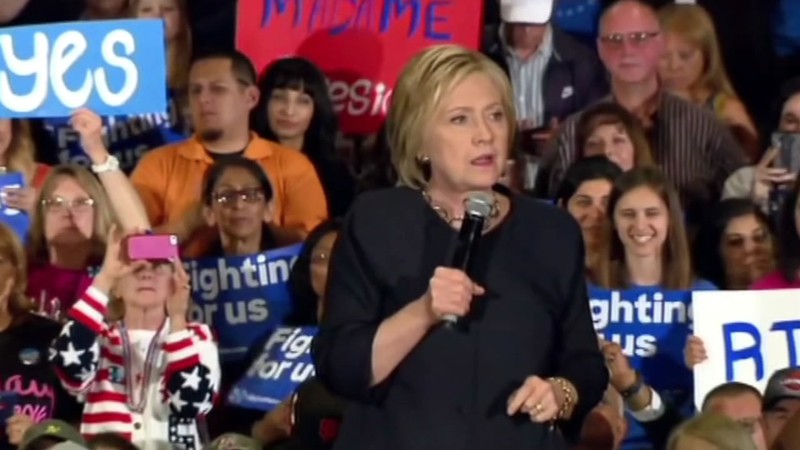 SAN JOSE, Calif. (KGO) -- Hillary Clinton made an appearance in downtown San Jose at a rally where she worked to gather support for her campaign to become the Democratic presidential nominee.

Many people shook blue signs pasted with Clinton's campaign slogan, "Fighting for us," as she stepped onstage this afternoon at Parkside Hall in her first of two Bay Area stops.

Clinton was dressed in a navy blue pantsuit as she waved to hundreds of people at the hall, where she stepped out an hour later than scheduled but was met with loud cheers.

In her 30-minute remarks, Clinton made numerous comparisons between herself and probable Republican presidential nominee Donald Trump.

She criticized Trump for his plans to decrease taxes for billionaires and build a wall along the Mexican border.

Trump's insults have attacked a variety of groups such as immigrants and individuals like U.S. Senator John McCain.

Trump hasn't addressed what he'd do about education, an issue she plans to improve through free community colleges and public universities to make sure graduates are debt-free. She would also seek to provide more opportunities for technical education, she said.

"We need more ways for people to get the skills that will be competitive for themselves and for their families," she said.

Clinton also took time to describe what happened in the Situation Room when she was part of a small group of officials that assessed the intelligence in the raid on Osama Bin Laden in 2011.

Group of @BernieSanders supporters line up across from @HFA event in #SanJose Parkside Hall. #abc7now pic.twitter.com/bWmnsjZOcd

"No president wants to seek out those kinds of situations but every president faces those hard choices," she said, adding she'd take care of those serving in the military.

Other proposals Clinton said she would push for included affordable Internet, more jobs, investments in infrastructure and clean renewable energy if she becomes president.

Clinton laid out her intentions to pass reforms on immigration and gun safety. She also promised to defend marriage equality and LGBT rights.

Clinton called on voters to cast their ballots as soon as possible with the state's primary election less than two weeks away.

"We've got to start right here in California making the future that we want to see for our country, for our children and grandchildren," she said.

Alexis Lewis, 62, of San Mateo has seen Clinton speak five times and has been drawn to the presidential candidate's sense of "inclusion."

"Everybody's a part of this great country and she feels like we've all done our part no matter what race you are," Lewis said.

Daly started crying when she saw Clinton, who she considers a smart and dedicated person fit to become president.

"I can't think of a person more qualified or a person I trust more to be in that most important job in the world," Daly said.

Daly's 9-year-old son Shae was excited to see Clinton for the first time because he got to miss classes today at Golden View Elementary School.

What stood out for Shae was how Hillary was "truly" talking about Trump and discussed what she can do better.

The crowd was also energized with remarks from Lt. Gavin Newsom, state Assemblyman Evan Low and Santa Clara County Supervisor Cindy Chavez along with San Jose Mayor Sam Liccardo, Vice Mayor Rose Herrera and City Councilwoman Magdalena Carrasco as they spoke of Clinton's experience with various issues that qualify her to become the country's next president.

Clinton is also scheduled to speak at a 4:15 p.m. rally today in downtown San Francisco.

2 #HillaryClinton fans at San Jose event."Bernie isn't the only one getting people showing up early in the morning." pic.twitter.com/CCjNmjRije