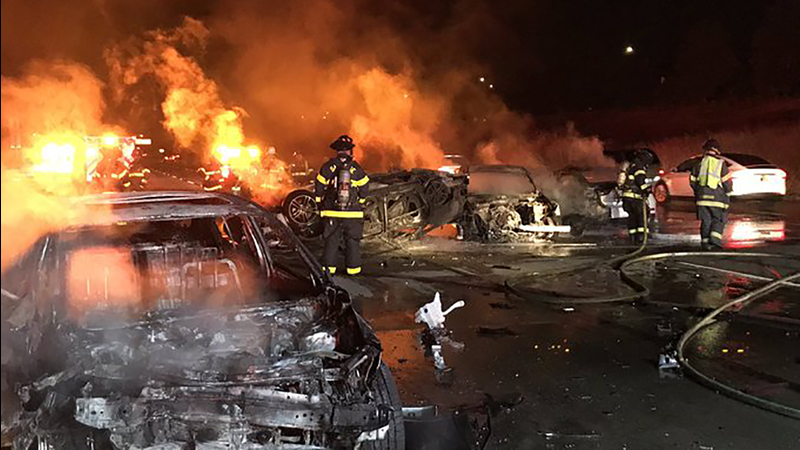 1 dead after fiery crash on Hwy 101 in San Jose

SAN JOSE, Calif. (KGO) -- A five-vehicle crash on northbound Highway 101 at 3:30 a.m. caused a huge fire and killed one man. It happened north of Bailey Avenue and South of Highway 85 in South San Jose.

"I have been an officer for 17 years -- I don't think I have had as many vehicles on fire at one point," said Officer Chris Miceli of the California Highway Patrol.

He says it started with one car that hit the center divider.

The driver of that car died. Investigators have not been able to identify the driver and at this point don't know why he crashed. The second car to come along was a Ford Fusion. It hit the original car and landed on its roof in the middle of the highway. The next cars to come onto the scene and crash were a Toyota Yaris, a Toyota Tacoma and then a Subaru.

The back-up stretched for miles -- all but one lane was closed for almost five hours. They reopened all lanes a little after 8 a.m.

Investigators are asking any witnesses who can help them piece together what happened to give them a call. The CHP office in Gilroy is handling the investigation.

What the scene looks like right now on northbound 101 in San Jose at the scene of a four car fiery fatal crash. pic.twitter.com/ct53pw0piV

A fiery crash in South San Jose killed one person and hurt two others. All but one lane is closed. This is Northbound 101 north of Bailey Avenue and south of highway 85. pic.twitter.com/AaG5kTaIA7