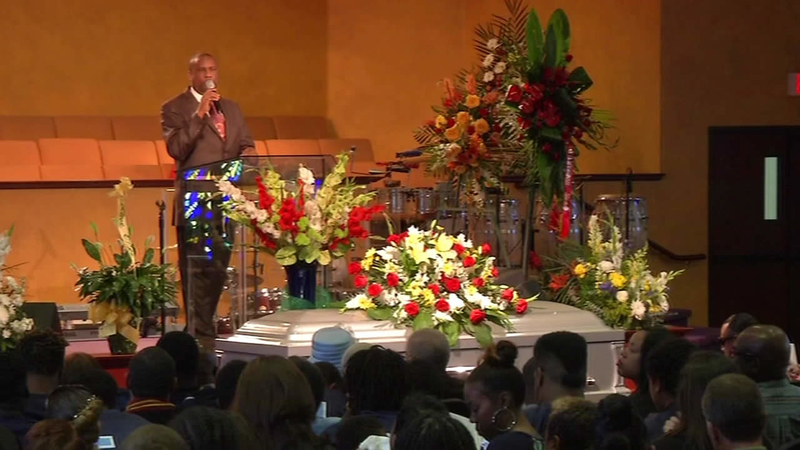 Funeral for football star killed in crash with controversial guardrail

OAKLAND, Calif. (KGO) -- An East Bay football player with big dreams was laid to rest on Wednesday after he was killed in a collision with a guardrail that's being blamed for highway deaths all around the country.

Caltrans announced on Wednesday that its crews will not install more of a controversial guardrail system until results from new federal crash tests come back. And a state senator is now calling for safety hearings. This all follows an ABC7 I-Team report on the crash-related death of a Bay Area football star. His family held a funeral service Wednesday in Oakland, and spoke exclusively with the I-Team.

The 6'7" defensive end starred at Berkeley High School, played at Kansas State and even tried out for the San Francisco 49ers this past April.

His parents spoke to the I-Team on Tuesday about their loss.

"It is a deep, deep, deep gulf and you know you'll never get to the other side," said the victim's father, Darryl Blackmon Sr. "You'll never be filled, there will be no bridge, it's just always going to be empty."

Darryl Blackmon Sr. is a Navy recruiter. Florence Blackmon is a Berkeley parking control officer and longshoreman. They tell me the family's work ethic may have played a role in the crash. Their son worked all three of his jobs that day -- at the Sports Authority in Walnut Creek, as defensive line coach at Contra Costa College, and as a bouncer at a San Francisco nightclub. They believe he fell asleep at the wheel coming home at 4:30 a.m. on Nov. 1.

"He should not have been taken away in that, I mean if he fell asleep at the wheel, fine, but that equipment should've stopped that car," Florence said.

As the I-Team first discovered last week, Darryl hit what's called an end terminal on the guardrail at the 101 Mill Valley exit. Here's how it's supposed to work -- the force of the car pushes the end terminal down the length of the w-shaped guardrail, flattening it into a ribbon of steel that curls off to the side. That process gradually slows the car.

Crash example showing how a guardrail is supposed to work.

But lawsuits filed after crashes across the country allege that the device called the ET-Plus can lock up, causing the guardrail to pierce the car. Or it can kick off to the side, allowing the car to continue on.

That appears to be what happened to Darryl Blackmon. His Chrysler Sebring hit a sign post and flipped upside down.

"It begs the question -- why are we still using this product?" said State Senator Mark DeSaulnier, D-Walnut Creek.

DeSaulnier is the long-time chair of the transportation committee. After seeing the I-Team's story last week about the ET-Plus, he's called for hearings and an audit of the Caltrans contract to purchase the end terminals.

"The fact that these are out there and they've been demonstrated not to work as advertised, and they continue to be out there just is unacceptable," he said.

Caltrans installed a new ET-Plus at the same location Darryl Blackmon died 10 days ago. They did announce Wednesday that crews will not install any more ET-Plus end terminals until the federal government wraps up new crash testing early next year. They have no plans at this point to replace the thousands of ET-Plus terminals on California highways.

"And every motor vehicle operator in the state needs to be made aware of this and something needs to be done about it," said Darryl Blackmon Sr. "They have an obligation to protect the users of these roads."

This is far from over. The family has hired a prominent guardrail attorney to sue Caltrans and the company that makes the ET-Plus. And DeSaulnier has just been elected to Congress. He tells the I-Team he will make this his first big issue when he takes office in Jan.