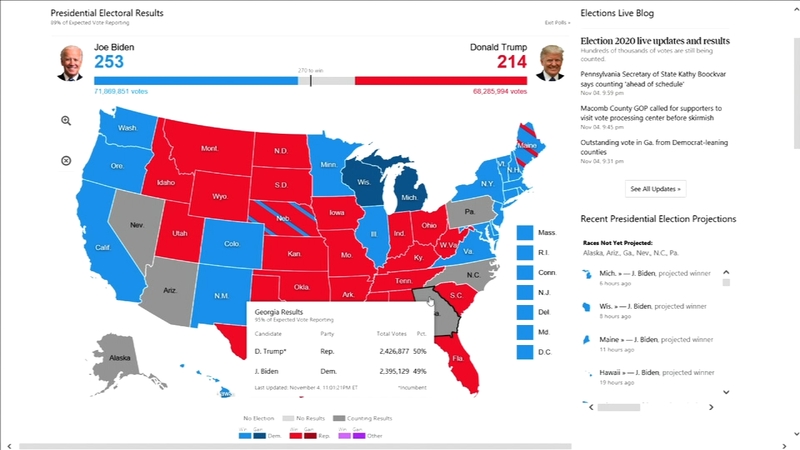 Top races in Illinois, including President of the United States

From Chicago's suburbs to the southern tip of the state, Tuesday's election featured several closely watched congressional races in Illinois.

Voters and psychological experts talk about election stress and what how to cope with it.

Rep. Lauren Underwood, a Democrat, is seeking a second term against GOP state Sen. Jim Oberweis in a Chicago-area district that leans Republican. The two were neck-and-neck Wednesday, with Oberweis holding a slight lead of less than 1,000 votes.

ABC News considers the race too close to call. Votes are still being counted.

The Underwood campaign released a statement Wednesday around noon, saying, "Votes are still being counted in this race and this race remains too close to call. We're excited to see record-breaking voter turnout across this community, and commend our county clerks offices for their work during this unprecedented election."

Underwood, who is Black, was the first woman and first minority to win the congressional seat once held by Republican former House Speaker Dennis Hastert. She ousted four-term Republican Randy Hultgren two years ago in a Democratic wave.

The race is among the most expensive in the state. Underwood, a nurse who lives in Naperville, raised more than $7 million, while Oberweis, a dairy magnate from Sugar Grove, raised about $2.5 million.

For the first time in more than three decades there'll be a new name in a congressional seat covering parts of Chicago's southwest side and suburbs.

Considered one of the most conservative Democrats in the House, he was preceded in office by his father, Bill Lipinski, who was first elected in 1982.

Democratic Rep. Sean Casten declared victory against Republican Jeanne Ives early Wednesday morning. ABC News has not made a projection in the race, but Wednesday morning Ives issued a statement conceding the race.

The first-term congressman flipped the longtime Republican seat covering suburbs west and northwest of Chicago two years ago. Casten, a Downers Grove businessman, has played up his background as a scientist in addressing the coronavirus pandemic and says Ives is too extreme for the district.

"Tonight, the voters of the 6th District sent a resounding message," Casten said in a statement Wednesday morning. "They voted for science and facts. They voted for decency, acceptance, and love, and rejected bigotry and racism. They said that they believe we should all have high-quality, affordable health care. They acknowledged the climate crisis and decided we must do something about it."

Ives said in part, "My team fought hard, but in the end the power of the opposition was too great. It is somewhat unclear to me what lies ahead for Illinoisans."

As he waited for final results to come in, Rep. Sean Casten addessed his supporters at a drive-in theater.

A former state legislator, Ives is an outspoken, and at times divisive, social and fiscal conservative from Wheaton. She made an unsuccessful bid for governor in 2018 and argued Casten's views don't fit the district.

Libertarian Bill Redpath of West Dundee was also on the ballot.

Newman, of La Grange, had an edge in the Democrat-leaning district, having vastly outraised Fricilone, racking up numerous endorsements and with name recognition built on an unsuccessful attempt for the seat in 2018. Fricilone, who works in sales and lives in Homer Glen, serves on the Will County Board.

Senator Dick Durbin gave a victory speech over Zoom after winning reelection as one of Illinois' two U.S. Senators.

After 38 years in Congress and the last 24 in the Senate, Illinois Democrat Dick Durbin will serve another six-year term. Durbin claimed victory Tuesday night as he thanked voters on a Zoom call.

The Senate's second-highest ranking Democrat had raised millions of dollars and was widely expected to win. The 75-year-old was first elected in 1996 and has been Democratic whip since 2005.

As the first African American woman to lead the second largest prosecutor's office in the country, Foxx will serve a second term as Cook County State's Attorney.

Early returns showed a very close race and O'Brien was hoping for an upset. But by 10 p.m., Foxx had a substantial lead.

O'Brien conceded the race Tuesday night, saying he "was hoping it wouldn't come to this, but it doesn't look like there's enough votes out there."

Four-term Republican Rep. Rodney Davis faces a tough reelection bid from Democrat Betsy Dirksen Londrigan in what's expected to among the most competitive races in Illinois.

No winner was declared on election night, with Davis garnering 55% of the vote, and Londrigan earning 45%. As of about 1 a.m., 99% of the precincts had reported.

The rematch follows Davis' narrow win over Londrigan in 2018 by less than 1 percentage point. The Republican-leaning district covers a swath of central and southwest Illinois, including farmland, universities and Illinois suburbs of St. Louis.

Davis, who first took office in 2013, has tried to portray himself as someone who can work with Democrats, touting his efforts on farm bills and transportation projects. He says Londrigan's ideas are too liberal for the district, including her support of public option health insurance.

"I went to Washington by promising the voters of this district, if they sent me there, I'd be a bipartisan voice for governing," Davis, of Taylorville, said at a recent debate. "And I've done that."

Londrigan made health care and coverage of preexisting conditions a central issue, saying it's even more urgent because of the coronavirus pandemic. The Springfield woman has targeted Davis' opposition to the Affordable Care Act.

"The stakes of this election have never been clearer for the hundreds of thousands of Central Illinoisans who rely upon the health care protections of the Affordable Care Act," she said in a statement.

Miller appeared to be in the lead early Wednesday, with 73% of the vote. There were 84% of precincts reporting as of about 1:30 a.m.

Miller of Oakland runs a grain and cattle farm with her husband state Rep. Chris Miller. She has said that creating economic opportunities is her top goal, something she understands as a local farmer.

"I will fight for fair trade agreements, to remove regulations limiting job growth and hiring, and to promote and utilize our region's unique assets and hard-working people to get our economy booming again," Miller told the (Decatur) Herald & Review.

Weaver is a public defender from Mattoon who also serves on a school board. She said the coronavirus pandemic has confirmed that health care, education and economic development are the highest priorities.

"I believe nothing is more important than creating good-paying jobs that can support a support a middle-class life," Weaver told the newspaper.

The district covers much of southeastern Illinois, running along a stretch of the Indiana border.

The FBI is investigating "robocalls" that urged voters to stay home rather than go to the polls. Illinois Attorney General Kwame Raoul told the I-Team that his office is investigating complaints of a small number of these calls targeting people in the Chicago area.

It's unclear whether the calls are part of any partisan agenda. They have hit Republican-leaning states as well as Democratic ones.

ABC 7 Chicago I-Team has learned about the details of some last minute election dirty tricks that targeted voters in Illinois-and elsewhere.

Despite some complaints cropping up across the country so far, there have been no major problems at the polls in Illinois -- though some voters told the I-Team there's an issue with a marker being used on ballots.

Some voters complained that the standard issue-Sharpie markers were bleeding through paper ballots, spoiling how they wanted to vote on the other side.

The Chicago Board of Elections announced that the polling place at James Otis Elementary, 525 N. Armour St., was flooded about 3:45 p.m., and directed voters in the 37th precinct of the 1st Ward to vote at the Goldblatt's Building, 1615 W. Chicago Ave.

"We'll make every effort to make sure that we secure and recover every single ballot," CBOE spokesman Jim Allen said at a news conference. "We don't think there were damaged voted ballots because those would already be in the scanner."

The city has shut down the Wabash Avenue bridge near Trump Tower for election night "as part of a precautionary measure to ensure the safety of residents."

City officials have raised the Wabash Avenue bridge Tuesday evening in a preemptive move to ward off election-night unrest near Trump Tower.

The bridge has been shut down "as part of a precautionary measure to ensure the safety of residents," said Mary May, spokeswoman for the Office of Emergency Management and Communications.

The bridge could be seen raised about 6:15 p.m. Tuesday. The strategy was employed multiple times this summer in attempts to keep the downtown area safe from looting during protests against police brutality and violence.

Chicago Department of Streets and Sanitation snow trucks and IDOT plows were also seen staging near the river.

May noted the city does not plan to block off any other bridges into downtown.

In addition to choosing the next president, Illinoisans also voted on whether to change the state constitution to move from a flat tax to a graduated income tax, where the wealthy pay more. Republicans declared victory in the battle late Tuesday night.

Supporters of the tax change said only the top 3% will pay more, while opponents argue it opens the door for taxes to be raised on the middle class down the road.

The flood of support in ads for the tax is almost entirely being funded by the $56 million donation by Governor JB Pritzker. Ads opposing the amendment are largely being funded by fellow billionaire Ken Griffin, who has given more than $46 million to an anti-tax coalition.

RELATED: Battle over proposed IL graduated income tax continues as both side blame other for deception

OTHER RACES IN THE SPOTLIGHT

- Rep. Cheri Bustos, the chairwoman of the Democratic Congressional Campaign Committee, faces a lively challenge from Esther Joy King, an attorney and captain in the U.S. Army Reserve who lives in East Moline. Bustos of Moline is seeking a fifth term in the northwestern Illinois territory that has historically leaned Democratic but voted for President Donald Trump in 2016. As of early Wednesday, the race appeared close, with Bustos earning 52% of the vote and King 48%.

- While judicial retention votes aren't often contentious, an effort to boot Illinois Supreme Court Justice Thomas Kilbride has drawn millions of dollars. He's part of the seven-member court's Democratic majority, which Republicans are now targeting. Voters in nearly two dozen counties in north-central Illinois will decide if Kilbride should get a third 10-year term. As of early Wednesday, the vote appeared close. There were 95% of precincts reporting about 1:30 a.m., and fewer than 2,000 votes separating the "yes" and "no" votes.