It features animations of the work of the iconic 20th century Mexican artist, seen through her eyes.
KGO
By Gloria Rodríguez 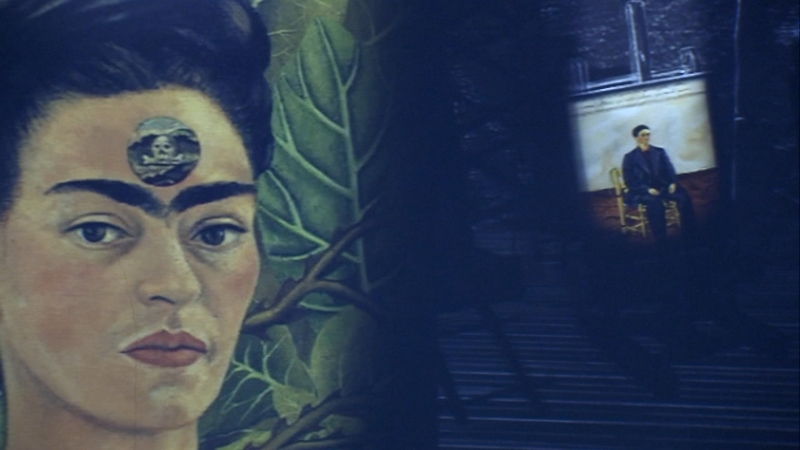 It features animations of the work of the iconic 20th century Mexican artist, seen through her eyes.

RELATED: Bay Area artist brings high flying, first of its kind exhibit to SF's Grace Cathedral
There are than 70 projectors illuminating over 500,000 square-feet.

Kahlo, known for her self-portraits, was born in 1907, died in 1954, and was married to painter Diego Rivera, known for his murals.

Immersive Frida Kahlo is co-presented by Lighthouse Immersive, the producers of the popular Immersive Van Gogh Exhibit, and Non Plus Ultra.

"She's not just revolutionary. She represents so many social issues, social questions that we all are as a society, that we're plowing through right now. And she is a phenomenal artist," said Svetlana Dvoretsky, Lighthouse Immersive co-founder.

"I think it's the first step that you can really know Frida, Frida's art, Frida's life," said Mara De Anda, of the exhibit. "This is great because you can immerse, you can feel, you can hear, you can see you can everything." De Anda is Mara R. Kahlo's daughter.

The love story between Frida and Diego is a theme in the exhibit, as well as her outspoken political beliefs and independent spirit.

"She was also bisexual, which was a very complex statement to make at that time," said Svetlana Dvoretsky, Lighthouse Immersive Co-Founder.

"She's a representative of the equal gender and she's ahead of her time," Mara De Anda said.

Kahlo was hurt in a bus accident when she was 18. The exhibit depicts some of her pain. But her family says the Frida they knew was also joyful.

"She had 27 operations, but she was a happy woman," Mara R. Kahlo said. "She liked to sing songs with her guitar. She used to play guitars and sing songs and to make jokes and (s)he was very happy and she always said, 'no, no, do it, do it. You can do it.' And she walk(ed) and she did it."