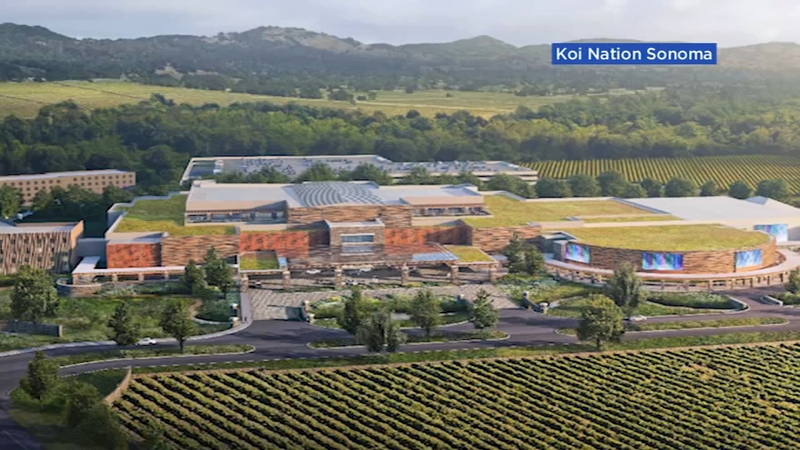 SONOMA COUNTY, Calif. (KGO) -- Sonoma County already has two casinos and now there is a push for a third. Five Sonoma County tribes are in opposition to the $600 million plan.

Tuesday, Sonoma County's Board of Supervisors will vote on whether or not to oppose the plan as well.

The casino would be built just outside of Windsor by the Koi Nation tribe of Northern California.

"The five other tribes are united and we're kind of standing in solidarity with them," said Sonoma County Supervisor David Rabbitt.

The concern is over Koi Nation's plan to reestablish its tribal land base, by building the Shiloh Resort and Casino, a 200 room hotel, spa-casino, with six restaurants, near Shiloh Road and Old Redwood Highway.

We spoke with those from Koi Nation when they unveiled the plan last September. They say the casino resort would create at least 2,000 jobs.

"It is a resort, I prefer to call it a retreat, it'll be subdued," said Dino Beltran, Koi Nation Vice Chair.

The indigenous community in the Bay Area is fighting the installation of a replica mission bell in Gilroy approved more than a year ago.

In these five letters though, the five tribes question Koi Nation's "historical connection" to Sonoma County, saying their ancestors are 50 miles away in Lake County.

The tribe's web site however, says, "most of their people" have lived in Sonoma County for more than 100 years.

"We don't want to step on the tribes' issues of establishing their homeland, but at the same time the casino issue is a huge one for us so the land-use is always gonna be big," says Rabbitt.

Land-use is an issue for many people we talked with. This major development would be on the outskirts of Windsor, where there are questions about roads, traffic, and plumbing just to name a few. Windsor Mayor Sam Salmon says he's neutral on the plan now, but has serious questions.

"In terms of land-use it may not be the right, it's not the right land-use for the current zoning and the current priority area. Can the KOI's somehow overcome that? I don't know," says Salmon.

Sonoma County Supervisors will vote on whether or not to oppose the plan. Indian reservations though, are considered Federal land, so the federal government will have have the final say here.

Koi Nation sent ABC7 News this statement Monday afternoon:
"Since our fee to trust application was filed on Sept. 15, 2021, the Koi Nation has actively reached out to local elected and community leaders to have an open discussion and inform them of our resort and casino plans. We are surprised and troubled that this resolution was placed by Sup. Gore on the Board's agenda without any notice to us. The Koi Nation has been, and will continue to be, open and transparent throughout the process of taking our land into trust for the benefit our members and the entire Sonoma community."