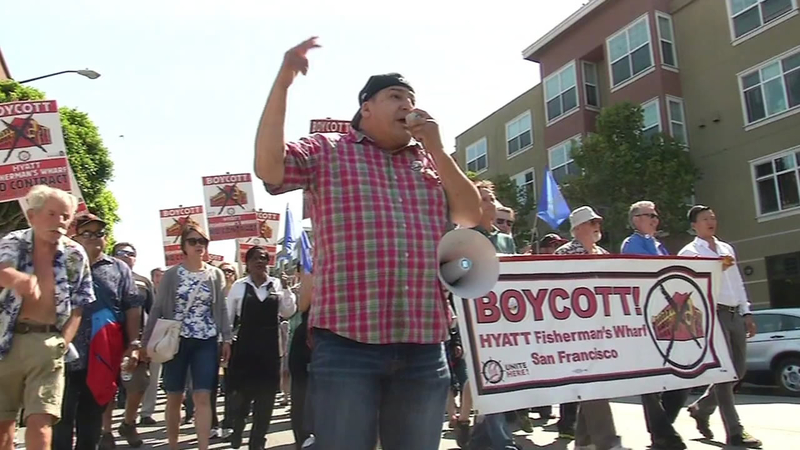 SAN FRANCISCO (KGO) -- On this Labor Day, a holiday intended to honor America's workers, tension is brewing over how little many are paid.

There's a widening gap between the poor and wealthy. It's a gap Bay Area voters may have a chance to start closing this November.

The Local Hotel Workers Union marched to form a picket line at the Hyatt Fishermen's Wharf on Monday.

They want the right to organize workers there in an industry that's not known for its good pay.

"Hospitality is the biggest in this city and if we don't raise the floor for workers in that industry, our whole city and its economy is going to get dragged down," United Here Local 2 Research Director Ian Lewis said.

Part of raising the floor is raising the minimum wage. Something San Francisco voters will have a chance to do this November.

"Statistics now show San Francisco has worse income inequality than many third world countries. There are some people who are making huge, huge incomes and everyone else has seen their wages stagnant," Lewis said.

A minimum wage hike will also be on the ballot in Oakland where workers have picketed in front of fast-food restaurants.

"We've got a recent study from UC Berkeley that indicates something like 40 percent of the people in fast-food restaurants can't afford alone with their wages the food on their own table. There's something profoundly wrong with that picture," UC Berkeley professor Harley Shaiken said.

Shaiken says a pay hike for minimum wage earners could actually take a huge burden off of everyone else.

"Public benefits that workers need simply to survive, like food stamps. So it transfers cost from the employer to the taxpayer," Shaiken said.

Speaking in Detroit, Vice President Joe Biden blamed low wages for slowing the economic recovery. "One of the reasons we're not growing because ordinary people have no money in their pockets for their wages," he said.

San Francisco's ballot measure would raise the lowest legal wage to $15 an hour over three years and Oakland's would raise it to $12.25.