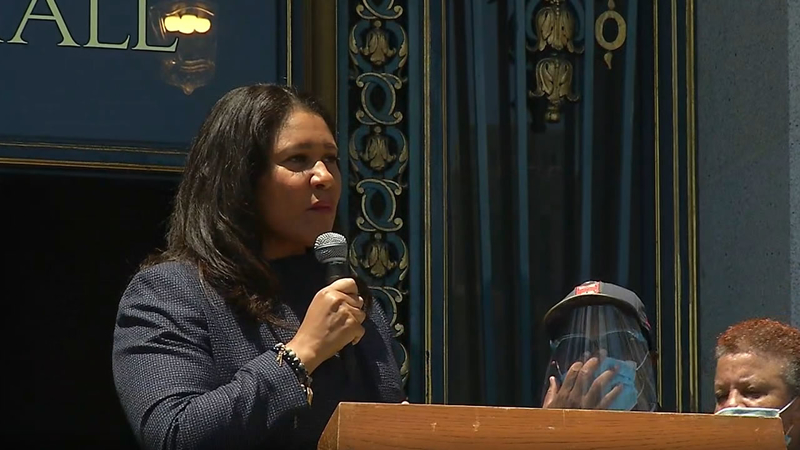 "You know, my heart has been heavy," she said to the crowd. "Yes, I'm the mayor, but I'm a black woman first."

The mayor went on to say, "The reason why I got involved in public office in the first place has everything to do with wanting to make sure that I'm the norm and not the exception."

Breed then shared a personal story with the crowd.

"In 2006, sadly my cousin was killed by the San Francisco police department.," she said. "When his mom showed up wanting to know what happened, she was treated like a criminal."

"I am angry. I am hurt. I am frustrated. I am sick and tired of being sick and tired. I don't want to see one more black man die at the hands of law enforcement," she said to a cheering crowd.

Jamie Foxx, Mayor London Breed and the Reverend Amos Brown were among many powerful speakers at the peaceful kneel-in event held at San Francisco City Hall amid protests over the death of George Floyd.

The mayor was joined by actor Jamie Foxx and other black community leaders at the kneel-in.


While the demonstration Monday afternoon appeared to be entirely peaceful, a curfew remains in effect until further notice in San Francisco. Everyone who isn't an emergency worker is required to stay inside their home between 8 p.m. and 5 a.m.

The curfew comes after several businesses were damaged in looting over the weekend. Police Chief Bill Scott said the city would need to see an "an improvement in behavior" before he'd recommend lifting the curfew to Mayor Breed.

Watch Mayor Breed's full remarks in the video above.