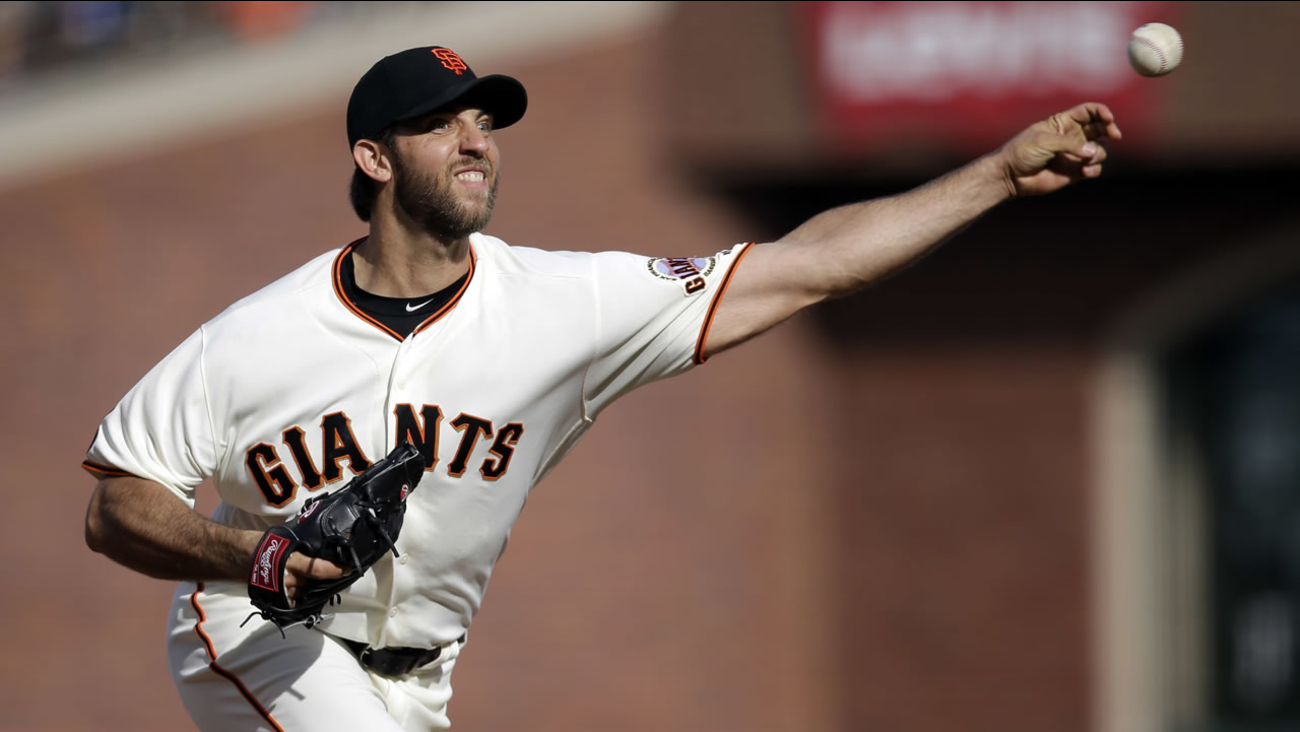 Giants' Madison Bumgarner throws to the Chicago Cubs during the second inning of a baseball game Sunday, May 22, 2016, in San Francisco. (AP Photo/Marcio Jose Sanchez)

SAN FRANCISCO -- The San Francisco Giants aren't lighting up the scoreboard, but they're doing enough to keep piling up the wins.

Madison Bumgarner pitched 7 2/3 dominant innings and doubled in a run in the fifth to lift the Giants to a 1-0 victory over the Chicago Cubs on Sunday night.

The Giants won for the 11th time in 12 games and took two of three from a Cubs team with the best record in baseball.

Bumgarner (6-2) struck out six and allowed three hits and two walks while winning his fifth straight decision. The Giants have won each of the left-hander's last six starts.

"It's not a bad day for Bum to pitch like that, shut them out and knock in the only run," Giants manager Bruce Bochy said. "That's a pretty good day."

San Francisco hasn't scored more than five runs in 15 straight games. Going into Sunday, the averaged 2.7 runs in their previous 14 games, batting .220 over that stretch.

The Cubs began the day with their best record in franchise history through 41 games since 1918.

"It's a fun series," Bumgarner said. "It was a little bit of the playoff atmosphere I guess with all the hype and the talk leading up to these games. You've got to look past that, but it is fun."

Giants closer Santiago Casilla pitched a scoreless ninth for his 12th save.

Hendricks allowed one run on three hits and three walks in 5 1/3 innings.

"We had to play our best ball because we're having a tough time offensively and their kid (Hendriks) was throwing the ball very well," Bochy said.

Bumgarner loaded the bases with two outs in a 28-pitch inning in the top of the first on a hit batter, a walk, and a Ben Zobrist single. He struck out Addison Russell on a 3-2 fastball to end the threat.

"He comes from a funky angle, an angle you don't see that much," Cubs catcher David Ross said. "It crosses his body, and he was able to mix in that cutter. He got out of that big jam in the first with the bases loaded, made a big pitch at 3-2 to Russell, and from there he kind of just settled in.

"He had the game out of control."

Bumgarner became the first winning Giants pitcher to drive in the only run in a 1-0 game since Russ Ortiz on Aug. 8, 2000, against the Brewers.

Bochy summoned Cory Gearrin to face Kris Bryant after Bumgarner gave up a two-out walk to Anthony Rizzo in the top of the eighth. Bumgarner had retired 19 of the previous 20 batters.

Gearrin got Bryant to line out to shortstop Brandon Crawford on the first pitch.