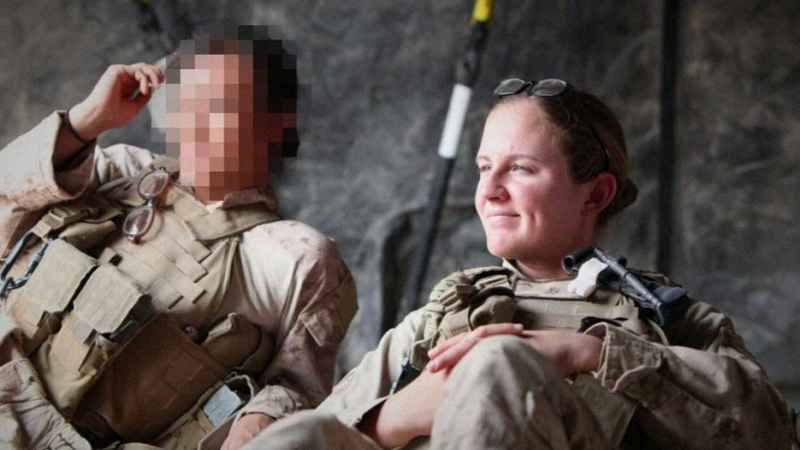 The U.S. Marine Corps is investigating allegations involving service members sharing possibly thousands of explicit photographs of other service members on a closed website. The founder of The War Horse, an independent journalism non-profit, broke the story.

ABC7 News spoke with a former Marine via Skype who was previously stationed at Camp Pendleton in California. She says she is relieved people are finally talking about what she says has been going on for years.

Kathryn Campbell shared a picture with ABC7 News that she says was taken in Afghanistan in 2010 when she was a Lance Corporal. Her name at the time was Kathryn Mannion.

She says she later discovered the photo where she is wearing her uniform on a private Facebook page with vulgar comments.

"Talking about rape, talking about was I hot enough to have sex with," explained Campbell.

"It was devastating to me," she continued.

"It was devastating to me" - Fmr. Marine describes seeing her pic on site w/vulgar comments by other service members pic.twitter.com/KKQ4zc3bJ4

Campbell says she never reported it.

"The command that I was in was a great one and I'm sure if I had come to them with this issue they would have been really receptive to it but the fact that it didn't even occur to me, it makes me sad to think about now," she explained.

Now the Marine Corps says it is investigating allegations of derogatory online comments and sharing of explicit photos on Marines United, a private Facebook group and closed website.

The Marine Corps tweeted, "Marines will not tolerate online or offline harassment."

In an emailed statement, the Marine Corps Veteran, Thomas Brennan, who broke the story writes "... the focus here should not be on me or the threats to my family, but on making sure the stories of the victims of these behaviors come to light."

"These pages that keeping popping up are reflective of a sickness within the culture of the Marine Corp," said Campbell.

Congresswoman Jackie Speier said in a statement, "This is not a case of a few bad apples, but a clear case of a culture where the rot has continued to spread and thrive. If there is a leadership component here, the President should fire those responsible."

"I'd like to see leadership address it head on, hold everybody accountable who has had a part in this," said Campbell.

The Marine Corps says if a marine shared a photo that was taken without a person's consent and under circumstances in which that person had a reasonable expectation of privacy, that marine could be subjected to criminal proceedings or administrative action.