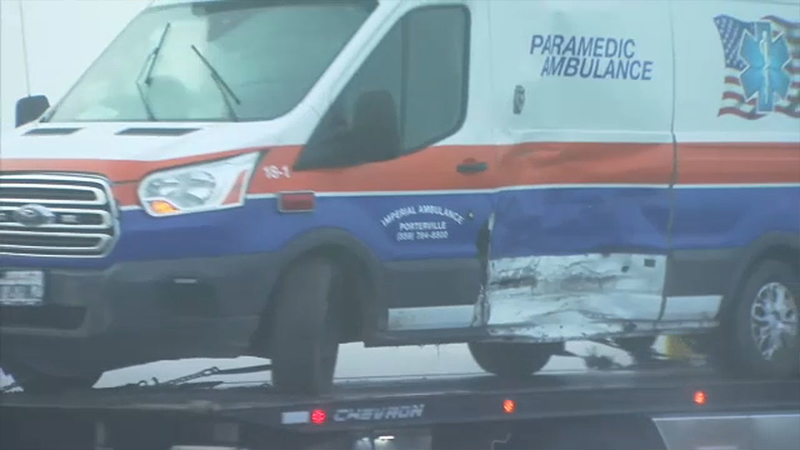 DOS PALOS, Calif. -- It was a terrifying morning on New Year's Day for drivers in Merced County.

Authorities say a man slammed his truck into several other vehicles, including an ambulance.

37-year-old Roderick Weston also broke into a home before being arrested.

Some of the victims hid from Weston in a gas station after he repeatedly rammed into their vehicles.

CHP officers say it appears he was high on meth, and he even told investigators he was driving like the video game Grand Theft Auto.

The rampage started at around 3:30 Wednesday morning on Interstate 5 near Gustine.

A woman reported Weston had stopped in traffic and jumped on top of her car.

"And as he jumps on top of the car, she got scared and took off, drove away. She didn't know if he fell off or if he was hurt from when he jumped on the car," said CHP officer Shannon Stiers.

Weston then made his way to Highway 152, crashing into at least six different vehicles in the fog, including an ambulance that flipped on its side.

Officers say fortunately it was not transporting any patients and the driver was not seriously hurt.

A Honda Civic was one of the next targets.

The driver, Ray Fernandez, had pulled over near Highway 33 to rest after celebrating New Year's Eve at Chukchansi Casino.

Ray Fernandez said his wife then jumped out of the car so he ran after her.

"The guy chased us with his car and then made some racial... like asked if we were American, are we going to kill him and if we called the cops. We told him, 'No, man! Can you just turn your car off because you're scaring us. You just ran us off the road and into the bushes'."

Fernandez said the suspect then started doing doughnuts in the middle of the highway with his Toyota Tundra.

That's when three people in a Dodge Ram came to the couple's rescue.

"We pulled over and I see a woman and a man, the man almost gets hit, and the woman just flies into the truck and says, 'Get us out here, get us out of here'," said Jake Rianda.

Rianda said he tried to get away, but Wilson was relentless, even pinning his truck against the Dos Palos exit sign.

"At that point I back up and go forward and he catches up to us and rams us off the road three times and almost flips us," said Rianda.

The group finally made it to a nearby Chevron in hopes of hiding from the suspect.

Investigators say Weston then plowed through a fence, drove through an orchard, and crashed into a ditch before breaking into a nearby home.

The couple living there called 911, and deputies arrested Weston, bringing the manic morning to an end.

While Fernandez and his wife were hiding out at the Chevron, they say someone broke into their car that was still on the side of Highway 152.

The thieves stole his wife's purse and cell phone so now they are the victims of two separate crimes on the same day.

Weston is now booked in the Merced County jail for DUI and assault with a deadly weapon.

He is from the city of Rocklin in Placer County.

Investigators are still looking into what he was doing in the area as they continue to piece this case together.