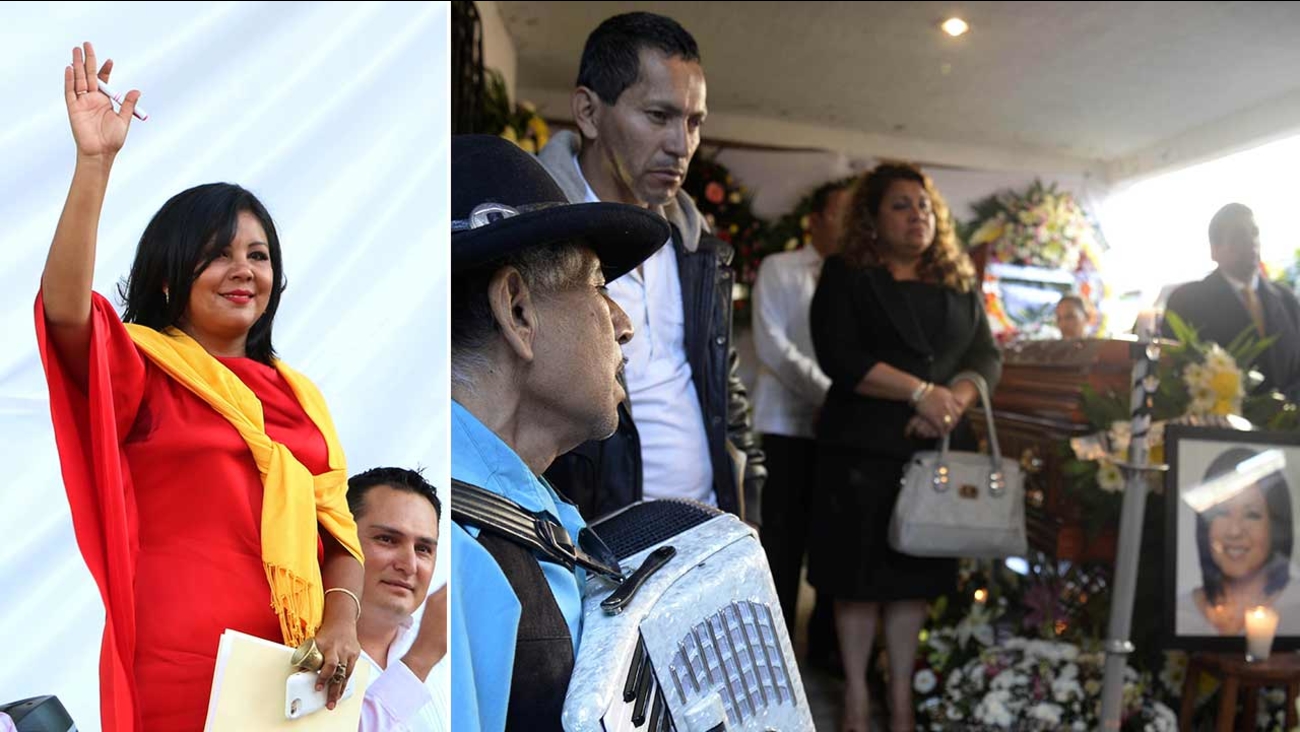 MEXICO CITY -- Three people, including a minor, were being held Sunday in the slaying of a newly inaugurated mayor just hours into her term in a gang-troubled central Mexican city.

He blamed organized crime for killing the 33-year-old Mota, a former federal congresswoman who had been sworn in as mayor the day before she was gunned down in her home Saturday morning.

Ramirez ordered security measures for all of the state's mayors, though he gave no details on what that involved.

Ramon Castro Castro, Roman Catholic bishop of Cuernavaca, celebrated Mass at Mota's home Sunday and later spoke critically of a state where some areas are in control of organized crime.

"One theory could be that it was a warning to the other mayors," Castro said to reporters. "If you don't cooperate with organized crime, look at what will happen to you. It's to scare them."

Following Mota's killing, two suspects were killed in a clash with police and three others arrested. Officials said those taken into custody were a 32-year-old woman, an 18-year-old man and a minor. They gave few other details, though state Attorney General Javier Perez Duron said the suspects had been tied to other crimes.

Temixco, with about 100,000 people, is a suburb of Cuernavaca, a city famed among tourists for its colonial center, gardens and jacaranda-decked streets. "The city of eternal spring" was long a favorite weekend getaway for people from nearby Mexico City.

But drug and extortion gangs have plagued the area in recent years, driving away some tourists and residents. The expressway - and drug routes - between Mexico City and the country's murder capital of Acapulco cuts through Cuernavaca and Temixco.

Neither the governor nor prosecutors indicated which criminal organization might be involved in the mayor's slaying.

Drugs, kidnappings and extortion in the area were once under the control of the Beltran Leyva cartel, but that group's collapse a few years ago unleashed fierce competition among its progeny and rivals in Morelos and neighboring Guerrero and Mexico states.

In December 2014, a state lawmaker who was a candidate for mayor of Temixco from the same party as Mota, was kidnapped there. Authorities rescued him the following day and blamed the Guerreros Unidos cartel, which has been clashing with a group known as Los Rojos in Guerrero and Morelos.

Temixco also saw one of Mexico's emblematic killings of the past decade: The 24-year-old son of poet Javier Sicilia and six other people were found slain in March 2011, prompting the writer to start a nationwide movement against violence. Prosecutors said the seven apparently had gotten into an argument with men who turned out to be local members of the Pacifico Sur drug cartel.

Efforts to clean out corrupt local police who have protected gangs led Morelos to put officers under a unified state command in 2014. Temixco joined that system, though the state's main city, Cuernavaca, has resisted.

One organization representing mayors in the country, the Association of Local Authorities of Mexico, issued a statement saying nearly 100 mayors have been killed across Mexico over the past decade, "principally at the hands of organized crime."