Michelle Young talks about drama, journey as 'The Bachelorette' 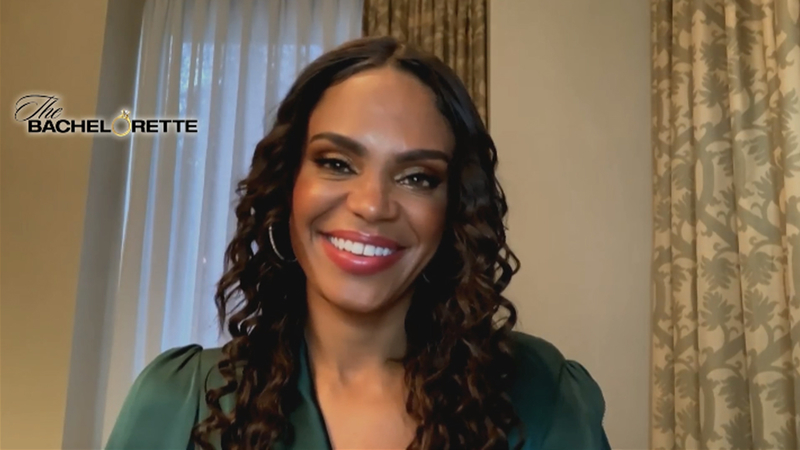 Michelle Young talks about her journey as 'The Bachelorette'

NEW YORK -- "The Bachelorette" is back for season 18 and "Bachelor Nation" will remember Michelle Young.

She's a 28-year-old grade school teacher from Minnesota who competed with others for the love of "The Bachelor" Matt James earlier this year.

"I think and I hope that people see I'm a genuine person and I'm an authentic person, but that being said that doesn't mean that I'm not going to make mistakes and as I was going through this journey I stayed true to who I was, but I made the best decisions that I could in that time and I'm excited for everyone to see how I kind of open up because I tend to be a closed-off person when it comes to relationships, and it's hard for me to be vulnerable, especially with that athletic background it's all about putting a game face on. So I think Bachelor Nation is going to see the fact that I'm pulling these walls down, they're going to see me cry, which is something I do not like doing in front of people, but they're going to see it all," Young said.

She is a former division one college basketball player who says she's looking for "her teammate for life."

Young her choice from among 30 eligible bachelors during the season, which was taped in California near Palm Springs.
EMBED More News Videos

"The Bachelorette" is back for season 18 tonight and "Bachelor Nation" will remember Michelle Young.

Even though there are 30 men, it can be difficult at times to figure out who is there for the right reasons.

"Walking in as 'The Bachelorette' I think it would be kind of nave to think that there's not going to be anyone there who, you know, is not there for the right reasons," she said. "So coming into it, in this role, I figured there might be a few and it was my job to weed them out. And so as that information was brought to me, that's kind of when I did my best to dive, to figure out what my intuition was feeling and make the best decision for myself."

The first night will have its fair share of interesting introductions, but despite all of the craziness at times, Young had a clear goal in mind.

"What I wanted out of night one was to just come in and feel like I could connect with multiple of the men who were there, that I could see a potential future, not necessarily falling in love on the first night, I'm not sure if anyone will see that from me. But it was me taking that first step to start to get to know them. And a big way to do that, the small talk, those conversations, those little things, kind of figuring out what these guys were about, was what I was really searching for that first night," she said.

One the show focuses on a lot is being emotionally vulnerable and being able to let your walls down. Young said despite going through this experience once already during "The Bachelor" she had trouble doing that at times.

"I would say that I was always willing to have difficult conversations, even before I came into this 'Bachelor' world, but with that, I wouldn't necessarily open up as much. My challenge to the men was to make sure that they're pulling those walls down, but in order to ask that, I had to pull my walls down as well. And so I think everyone is going to see that we all pull our walls down at sometimes and sometimes those walls also go back up," Young said.

"I think that Kaitlyn and Tayshia, I was so grateful that they were going through that experience with me. Just because I had two women who had actually been through this process themselves. And once you get into it, there are a lot of things that you can figure out, but it's also such an abnormal situation, where you don't typically date 30 people at the same time, and there are a lot of emotions that go into it, and there are a lot of different feelings that you're not used to feeling, and so to have Kaitlyn and Tayshia there to validate my feelings, to have them kind of guide myself through those feelings, and what I actually was feeling was incredibly helpful for me," Young said.

So does Young find love this season?

The two-hour premiere of "The Bachelorette" kicks off the primetime schedule tonight on ABC at 8 p.m. EDT, then it's the debut of "Queens" at 10 p.m.

30 charming men will join Michelle Young on her romantic journey when season 18 starts Oct. 19, 2021 on ABC.