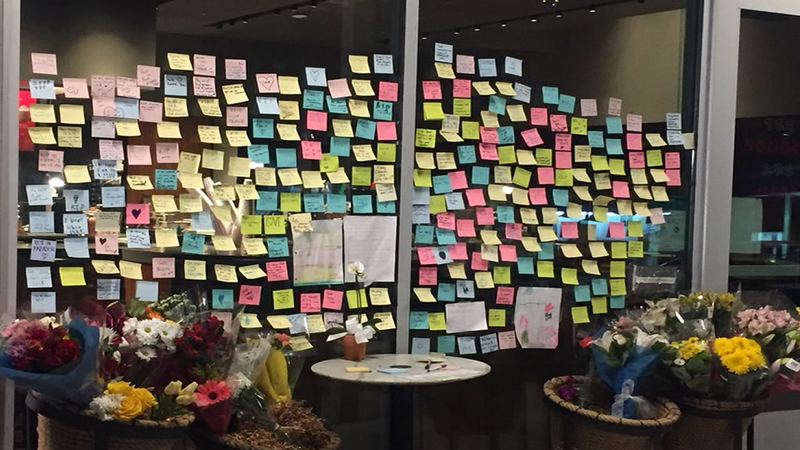 OAKLAND, Calif. (KGO) -- Friends and family are mourning a man who died on his 34th birthday after being dragged by a car outside a Montclair Starbucks in an attempt to get back his laptop from thieves.

ABC7 News Reporter Melanie Woodrow spoke to the man's co-worker and friend, as well as his cousin. ABC7 News is honoring the family's request to not reveal his name yet.

Post-it notes filled with condolences and questions are stuck to the window of the Montclair Starbucks on the 2000 Block of Mountain Boulevard.

Upper Rockridge resident Sue Graham set up the post-it notes this morning so that people could write down their feelings.

"I thought I don't know this man, I wasn't here but I live here and he was part of my community," said Graham.

"We were extremely shocked in disbelief I think," said Tseng.

Friends found he had died in the most heart-wrenching way, arriving at his apartment for his joint birthday party, New Year's Eve celebration and then getting a call from police as they waited outside his closed door, saying he had passed.

"We were actually going over to his place to celebrate New Year's Eve, but he wasn't there. We got there at 7 p.m. and were like, 'Where is he?' I think just a little after that, the police called us and told us that he passed away. It was also his birthday," Tseng said.

Tseng said that he worked with his friend in tech and that he lived in Oakland with a roommate. Although he was not a Montclair District resident, he frequently went to the Montclair Starbucks to work on his laptop.

RELATED: Tips to prevent your laptop from being stolen, what you should do now if it is

His cousin who wishes to not publish her name says he's a software engineer. She believes he either wanted to preserve all of his research or perhaps save the photos he was editing from their recent vacation together.

"I still can not believe that this happened," she said. "I do not want him to be remembered as a victim of a robbery because he's so much more than that. He's a scholar, he constantly reads."

Tseng says he also loved hiking and was a talented photographer.

"He liked the outdoors, and he actually brought a lot of us together a lot of times, you know, for activities," Tseng said. "He was a good friend. He was a really kind guy."

The victim's parents are now coming from China and his cousin from New York to identify his body.

Starbucks customer Sue Taylor was sitting next to the victim before he ran out. She later handed his cell phone to first responders.

"It was still warm from his hand. I mean, it was just seconds. He was there one second and the next... he was really gone," said Taylor.