"He was just trying to get to school... that's the hardest thing about it."
KGO
By Amanda del Castillo 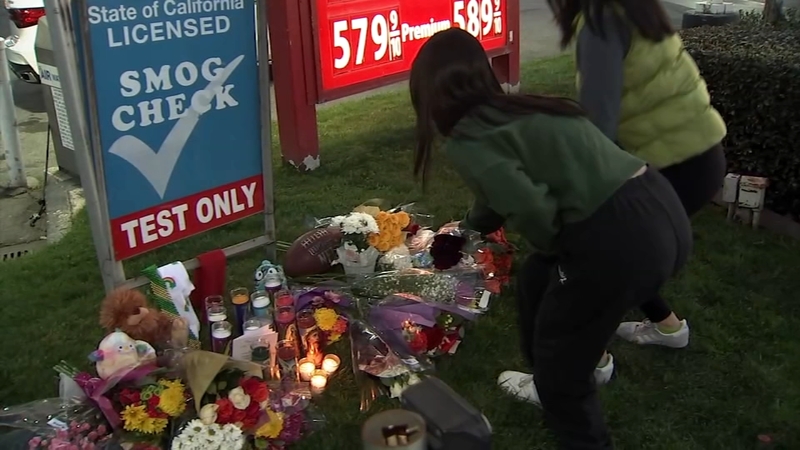 Mountain View teen killed in collision while biking to school

MOUNTAIN VIEW, Calif. (KGO) -- At the busy intersection of El Camino Real and Grant Road in Mountain View, the sound of racing cars was met with silent reflection on Thursday.

Family, friends and community members came to mourn the 13-year-old boy who was hit by a transport truck while riding his bicycle to school.

The collision happened during the morning commute. Mountain View PD (MVPD) said the teen died at the hospital.

"He was just trying to get to school," family friend Beth Burton told ABC7 News. "And that's the hardest thing about it."

“He was just trying to get to school… and that’s the hardest thing about it.”

Word from family and friends.

A 13yo boy was hit while riding his bicycle at the intersection of El Camino Real and Grant Road. @MountainViewPD say he died at the hospital.

MVPD said around 8:15 a.m., they learned about a crash between a bicyclist and a large transport truck.

In a release, the department explained, "Patrol officers and Mountain View fire personnel immediately responded to the scene and began attempting life-saving measures on the cyclist. The teenager was subsequently transported to an area hospital where he unfortunately died."

SKY7 was above the scene and captured a blue travel truck in the right-most lane.

"Incredibly cooperative," MVPD Public Information Officer Katie Nelson said. "At this time, he has been released. No charges. Of course, as more information comes forward, and as more investigation is conducted, we're happy to update our community as needed."

Nelson shared, "We can confirm that neither speed nor drugs or alcohol are factors in the crash."

A volunteer crossing guard was killed as he saved children from an oncoming car near a Lafayette middle school, his family told ABC7 News.

However, cyclists and residents told ABC7 News, the intersection is known to be dangerous.

"It's the most brutal intersection I've ever been in in my life," resident James Conley said. "I walk on here- people completely ignore you here, across the street, and especially catty-corner from here."

ABC7 News asked MVPD about issues at the intersection.

"I don't want to equate necessarily that any of those issues pertain to this particular incident," Nelson said. "I can't confirm that at all. But we do know that we have been out there several times in the past to conduct enforcement."

She added, "I believe the city is involved in road upgrades, along with repaving of that area- in conjunction with Caltrans, which actually maintains El Camino Real as it is a state highway."

"It is with great sadness that I inform you that the life of one of our Graham Middle School students was tragically cut short this morning after a bicycle incident. There are not words that I can say to help take away the pain that we are collectively feeling," the letter read.

The teen's family stopped by the scene late Thursday. They didn't want to speak on-camera, but explained the boy was deeply loved.

Others who knew him described him as a great little soul.

"He was just always polite... always had a smile on his face," Beth Burton said. "He would come over to our house and just always be in a good mood. He was a great little guy."

Burton added, "I wanted to bring flowers just to show my respect and just come to where he last was."

Nelson with MVPD said the department is asking for witnesses to come forward. She said, "If anybody who had seen the totality of circumstances today, there is an officer that is investigating the crash on our traffic team. His email is available on our press release."