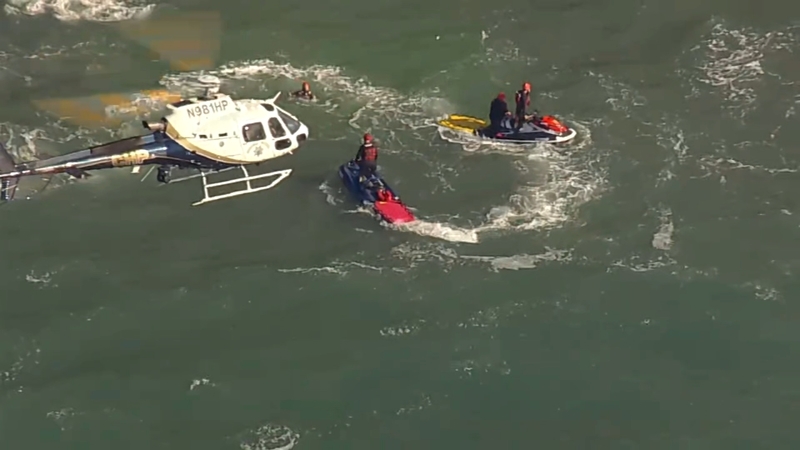 1 of 3 fishermen still missing in waters of Muir Beach

MARIN COUNTY, Calif. (KGO) -- Two recreational fisherman have been safely rescued in Marin County, but a third is still missing as of late Monday night. That man was swept into the ocean as the three fished from rocks near the Muir Beach Overlook.

SKY7 video shows one of two fisherman being rescued from the rocks along the water.

Sadly, a third fisherman, a cousin of the other two, was swept into the ocean and has not been found.

"When he just sat right there, the waves just grabbed him, and just swallowed him down," said Marlin Padilla.

Padilla was one of the two rescued and brought to shore by a CHP helicopter. He says while they were fishing, the waves intensified. He described that moment when his cousin, Jose, was struggling in the water, and then the moments afterwards when he threw off his clothes, and jumped in to try and save him.

The missing man is one of three fishermen who hiked to water from #MuirBeachOverlook (shown here). Two of the men were rescued unharmed via CHP helicopter. The trio are from San Francisco.

The Coast Guard, National Park Service, and numerous local agencies have been searching from air, water, and land but have had no luck in finding Jose.

"Water temperatures and stuff like that, if you don't have a rescue in the first half hour, you're not going to have one, water is cold," said Chris Gove who is the Muir Beach Fire Chief.

Family members though, are holding out hope. Jose's fiancée was seen standing with park rangers into the evening in hopes of promising news.

"It was really cold! Trust me, it was really cold, but to be honest at that point I was more focused on trying to save my cousin than what happened with the water. I tried but there was no more that I could have done for it," said Padilla.

Family members of the missing fisherman tell ABC7 News they will be back in the area Tuesday morning. The fiancée of that man tells us she understands that Jose and the two others were fishing in a dangerous spot.

She is hopeful that going forward, people use their best judgement and try to stay out of unsafe situations.