The Golden State Warriors and Cleveland Cavaliers tip off in Oakland during Game 1 of the 2017 NBA Finals, their third consecutive showdown for the championship, June 1, 2017.

OAKLAND, Calif. (KGO) -- Remember when Stephen Curry was ejected from an NBA Finals game? Or when Draymond Green was suspended for another?

There has been plenty of on-the-court drama between the Golden State Warriors and the Cleveland Cavaliers during their battles for the championship. Here is a look back at the last three NBA Finals showdowns.

Back in June of 2015, no one knew this would become a clash for the ages. The Warriors had not won a championship in 40 years and had only been to the playoffs in just three of the past 20 seasons. The Cavaliers had never won an NBA championship. Both teams had rookie coaches. Steve Kerr left the broadcast booth to take over the Warriors and David Blatt left a successful coaching career in Europe to lead the Cavaliers.

The Warriors were led by the Splash Brothers, Stephen Curry, who won the NBA Most Valuable Player Award, and Klay Thompson. The duo finished first and second in three-pointers made during the 2014-15 season. The Cavaliers had The Big Three: LeBron James, who returned to the team after several championships in Miami, Kyrie Irving and Kevin Love. However, Love got injured in the playoffs and did not play in the series.

The first two games were played at Oracle Arena in Oakland. The Warriors won the first game 108-100 in overtime, despite James scoring 44 points -- a career best for him in the NBA Finals. The difference was the Warriors bench, which outscored Cleveland 34-9. In Game 2, Cleveland was without Irving, who fractured his kneecap and missed the rest of the Finals. The game also went into overtime. The Warriors had one last chance to tie it, but Curry's three-pointer was off and Cleveland won 95-93.

The series went to Cleveland for game three. The Cavaliers held Curry to three points in the first half and won 96-91 for a 2-1 series advantage. Game 4 was a turning point as the Warriors made a major change. Kerr went with a small lineup, putting Andre Iguodala in the starting lineup and replacing center Andrew Bogut with Draymond Green. The move paid off. The Warriors won easily 103-82 to tie the series 2-2. Golden State went on to win the next two games and claimed their first championship since 1975. Iguodala, who was tasked with guarding James, was named Finals' Most Valuable Player.

Golden State came into the series on a roll. The team won an NBA record 73 games during the regular season. It looked like the Warriors would rout Cleveland after the first two games in Oakland, beating the Cavaliers by a combined 48 points, the largest margin on victory after two games in NBA Finals history. The Warriors held a 3-1 series lead after splitting the next two games in Cleveland and were one win away from another championship, but then things started to unravel. Near the end of Game 4, Green was called flagrant foul for hitting James in the groin. He was suspended for Game 5 back in Oakland. Cleveland took advantage. James and Irving scored 41 points each and won handily 112-97.

In Game 6, the Warriors were without Bogut after the center injured his knee during Game 5 and was out the rest of the series. Cleveland had a 20-point lead after one quarter and never looked back. At one point in the second half, James scored 18 straight points for Cleveland. With just over four minutes left in the game, Curry fouled out and was then ejected from the game for tossing his mouthpiece into the stands.

RELATED: The moments when Cavs-Warriors IV seemed inevitable...and when it didn't

Game 7 was an epic one. There were 20 lead changes and 11 ties. The Warriors jumped out to a 49-42 lead at the half but then went cold in the final quarter. Golden State did not score a basket in the final 4:39 of the game. With less than two minutes left and the game tied, James swatted away a layup attempt by Iguodala in a play known to Cavalier fans as "The Block." Cleveland won 93-89, the first team to come back from a 3-1 deficit in NBA Finals history. The city of Cleveland celebrated its first major sports championship in 52 years. James has 27 points, 11 assists and 11 rebounds, becoming just the third player to record a triple-double in a Game 7 of the NBA Finals.

This was a historic rematch. It was the first time two teams faced each other for three consecutive years in the NBA Finals. After losing the previous year, Golden State signed Kevin Durant as a free agent and went on to win 67 games in the regular season. Both teams were on a roll. At 12-0, Golden State had not lost a game during the playoffs, winning by an average of 16 points. Cleveland had only lost one to reach the Finals. The Warriors cruised to victories in the first two games at home, winning by 22 and 19 points respectively. Game 3 in Cleveland was closer but the Warriors still won 118-113, setting an NBA record for 15 straight wins to start the playoffs.

Cleveland fought back in Game 4. Irving had 40 points and James had his ninth triple-double of the Finals, the most in a championship series, to lead the Cavaliers to a 137-115 win. But this Warriors team was different than the one that lost a 3-1 lead in the Finals the previous year. An 11-point lead by the Warriors had dropped to just three when Durant hit a fadeaway shot over James to stabilize the team. The Warriors began to pull away for a 129-120 win and their second NBA championship in three years. 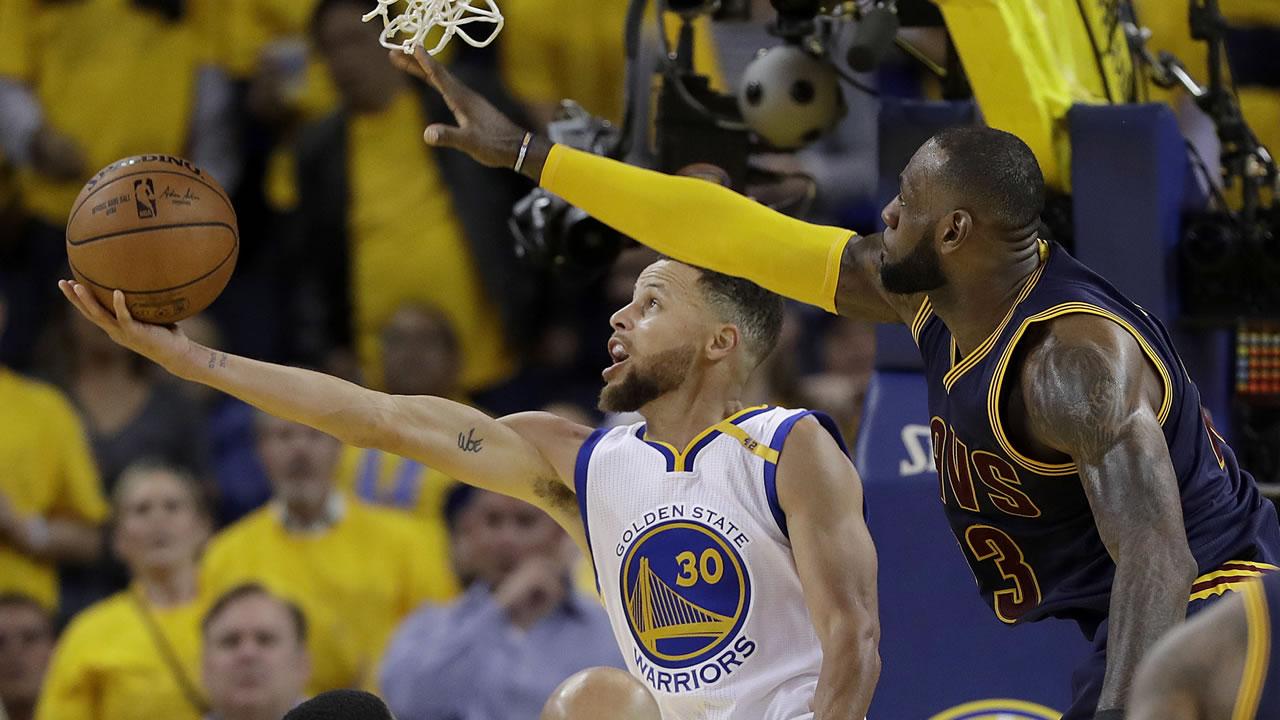 The moments when Cavaliers-Warriors IV seemed inevitable ... and when it didn't