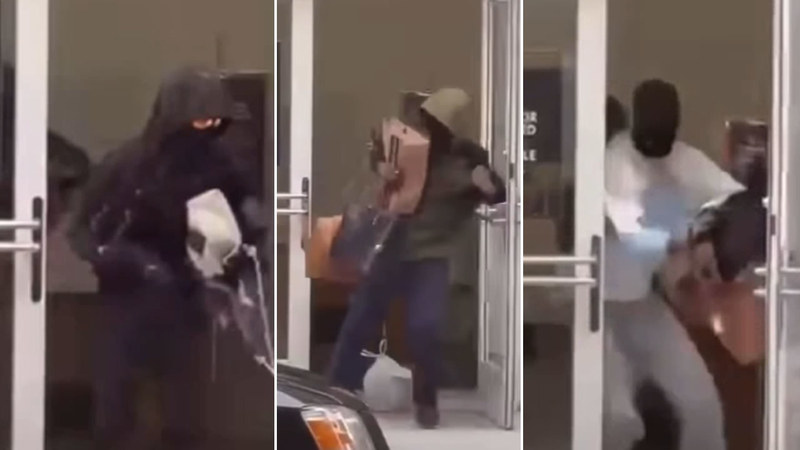 SAN FRANCISCO (KGO) -- Police are investigating a wild case of shoplifting at Neiman Marcus in San Francisco's Union Square, where a group of suspects bolted out the store with designer bags in hand before jumping into waiting cars.

Video obtained by ABC7 shows suspects running out of the department store with arms filled with merchandise.

SFPD confirms this shoplifting incident at Neiman Marcus in Union Square at about 5:49 pm.

A man I spoke w/tonite says his wife works in area, saw it happen & sent me this video which is circulating online.

Handbags at Palo Alto NM were also stolen in a similar fashion in May pic.twitter.com/KOSY8sbaGO

Police say the incident happened Monday at 5:49 p.m. at the store located at 150 Stockton Street in Union Square.

Shoppers and the California Retailers Association are reacting to the cell phone video that shows the 10 suspects.

"I can't believe it. I am shocked, because it shouldn't be happening," said Petaluma resident Liboria Maldonado as she and her husband, Rafael, strolled down Geary Street in front of Neiman Marcus Tuesday morning.

They love San Francisco so much, they visit the city once a week to shop and have lunch. But they are now having second thoughts about their routine.

"It's not right, not right for the people who live here," Rafael Maldonado said as he gestured to a shattered window at the former Jimmy Choo shoe boutique across from Neiman Marcus. The store now has a "For Lease" sign in the window. "We don't live here, but we love coming here and enjoying the city. But it's not safe like it used to be. It's not."

"We have been saying this for years to leaders in San Francisco, that this is a growing problem, and it is falling on deaf ears. This should not be happening in a city like San Francisco, said Rachel Michelin, president of the CA retailers association.

Neiman Marcus isn't the first, just the latest. Thefts have forced Walgreens to close 17 stores in San Francisco. Target is now closing some stores early in San Francisco because of thefts. The retailers association is hoping for a statewide approach on this issue but has not been impressed with San Francisco's response to past retail thefts.

"The answer is not what the mayor said last week which was retailers just need to hire more security guards," Michelin said. "That's not going to solve the problem. Security guards are there to observe and report. They're not there to stop crime. That's law enforcement. We have to figure out a way in San Francisco for law enforcement and local officials to work together."

She is calling for a statewide approach and says the state senate will vote next week to continue a task force that focuses on a cooperative solution.

"It allows law enforcement and asset protection for retailers to work across county lines to put these cases together and combat the organized crime piece of it," she said.

San Francisco Supervisor Ahsha Safai tweeted a response to the Neiman Marcus video Tuesday morning, saying: "We lost the flagship Gap in Union Square - if we don't deal with organized retail crime, I fear many other stores will close."

We lost the flagship Gap in Union Square - if we don’t deal with organized retail crime I fear many other stores will close. https://t.co/y1e3v5Dtip

Safai told ABC7 News on July 2 that he's asked both the police department and the District Attorney's Office to come up with a coordinated plan to reduce the organized retail crime and find out why San Francisco is apparently targeted more than anywhere else.

"These are people who are recruited, organized and are reselling these goods and San Francisco is hurting for it," Safai said last week.

Neiman Marcus told ABC7, "The safety and welfare of our associates and customers is our top priority, and we're relieved to report that no one was harmed in the incident. We're cooperating with the San Francisco Police Department in their investigation."

The Union Square Business Improvement District's Executive Director tells ABC7's I-Team, SFPD Ambassadors were not on duty yesterday. Even when they are, she says there are two to three of them walking a 30 block beat so they can't be everywhere.

SFPD says they're not certain if uniformed officers would have made a difference either.

"Could that have made a difference? We can't answer that," said Officer Rueca.

Neiman Marcus has dealt with this in the Bay Area before. A group of people stole handbags from the Neiman Marcus in Palo Alto in May. A Palo Alto Police Department Spokesperson says detectives are definitely exploring the possibility that the two cases are related and reaching out to SFPD.

San Francisco police have not made any arrests in the case.