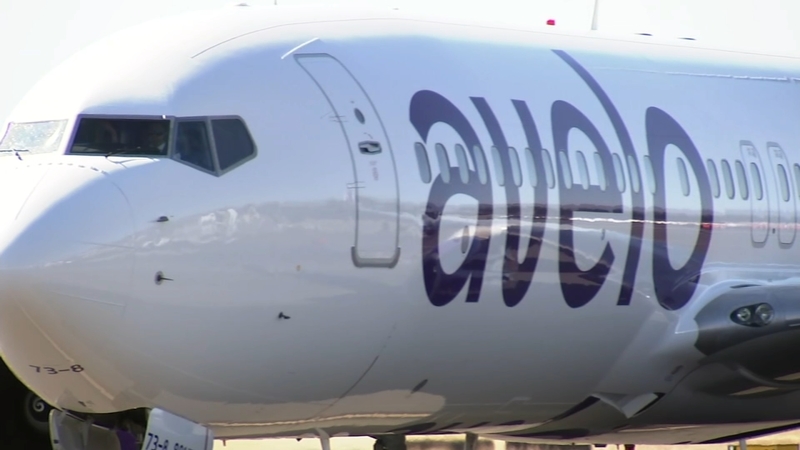 SANTA ROSA, Calif. (KGO) -- A new discount airline is touching down at one Bay Area airport. Avelo Airlines already has some passengers doing a double-take when it comes to its low fares.

The pandemic may seem like a bad time to start an airline, but its CEO disagrees.

An Avelo Airlines flight from Burbank arrived at the Charles M. Schulz Sonoma County Airport in Santa Rosa Wednesday. Otho Middletown and his family from San Francisco were onboard.

"Great flight and service, we loved everything about it," said Middleton.

Avelo Airlines launched just two weeks ago, the first new airline in the U.S. in 15 years. Currently, Burbank is its only destination from Santa Rosa but its dirt-cheap fares have passengers doing a double-take.

RELATED: Airfare deals are out there, but only for certain tickets

The airline is practically giving flights away.

"I was worried but I'm happy and I'll be flying quite a bit," said Rosemarie Smith from Los Angeles.

We made a one-way reservation to Burbank -- the price, $19. But there are add-on fees, like seat selection starting at $4, a carry-on bag costs $35. Jessica Middleton still thinks it's worth the trip.

"I think they want new customers. I'm willing to make that hour drive from SF, to catch a flight for $19," said Middleton.

You may wonder why a new airline is launching in the middle of a pandemic. The CEO says timing is everything.

"Overall, the pandemic was helpful for us. We were able to get things at less cost, like airplanes," said Avelo Airlines CEO Andrew Levy.

RELATED: Puppies training to be service dogs take flight thanks to help from Santa Rosa pilot

"We want people to give us a try," said Levy.

Avelo has other destinations in the west like Redding, Arcata-Eureka, Medford and Eugene.

As for those super-low fares, "We won't always have $19 fares. We have to make money but we're trying to build a brand," said Levy.