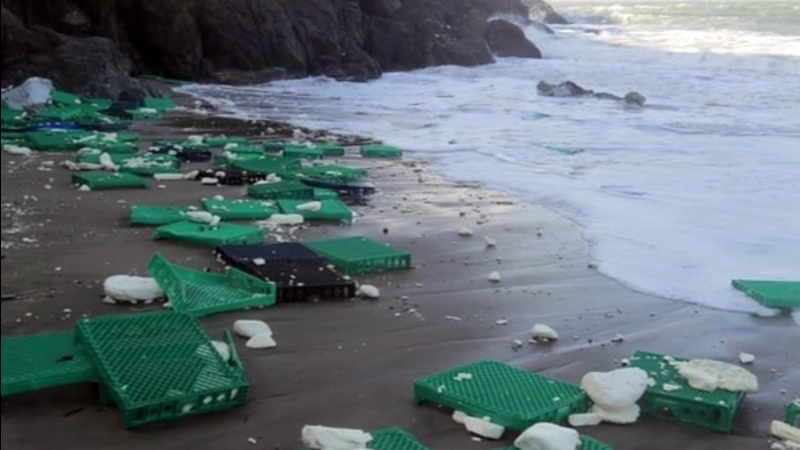 SAN FRANCISCO (KGO) -- U.S. Coast Guard officials remain on the lookout for debris coming from 12 cargo containers that fell off a ship and washed up on Baker Beach in San Francisco on Friday.

A container was first spotted at Baker Beach, but the clean-up centered near Mori Point and Sharp Park Beach in Pacifica.

#container quite the mess on a beach near Sharp Park in Pacifica. Crews hired by #matson cleaning up more spill pic.twitter.com/A6vvrSxemU

U.S. Coast Guard officials know about two containers, but they are tracking a third container that may still floating south of the Golden Gate Bridge.

On Tuesday, crews hauled truckloads of debris, empty bread trays and little pieces of insulating styrofoam that were inside the containers.

"Well I care about it and I tell you I'm impressed that they freaking hired someone to take care of it so quickly," Pacifica resident Joyce Toomey said.

In Pacifica, crews began cleaning Tuesday morning and continued all day. It was a scene similar to Baker Beach on Monday where the first of those cargo containers washed ashore.

San Francisco resident and artist Edward Sherman happened to be there with a camera when the container hit the beach and was able to get photos and video of the incident. "It eventually tore open, you could see the metal straining and it tore open, so birds started to swarm and I figured there was probably food in there and then you started to see the trays in the water and then they eventually washed up on the shore," he said.

Matson Inc. told ABC7 News that it believes most of the cargo containers sank, but some may have not because of their styrofoam insulation.

#matson This is what they are finding from a #container that washed ashore yesterday. Not just Baker Beach, now. pic.twitter.com/1A8OnE5wTd 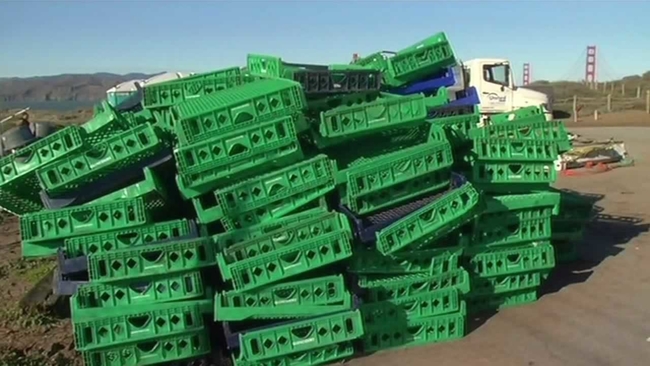