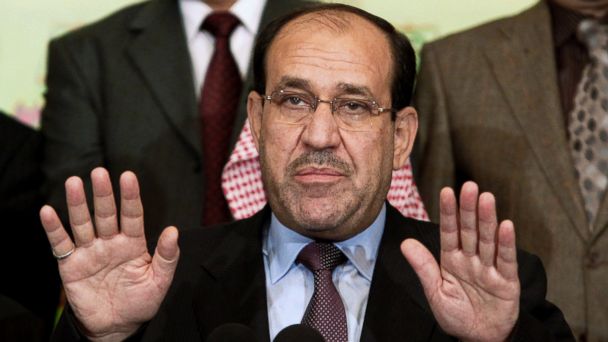 BAGHDAD, Iraq -- It is looking increasingly difficult for Iraqi Prime Minister Nouri al-Maliki to form and lead a new government with almost all avenues to power now blocked to him.

Shaping up as the political king-maker in the new parliament is the leader of the Supreme Islamic Council of Iraq, Ammar al-Hakim. In an interview with ABC News he said Maliki "has two obstacles. He must be accepted by both the national Shia Alliance, and by the other minorities."

On both those counts Maliki doesn't appear to meet the criteria.

The creation of a new government without Maliki at its head has picked up momentum as the al Qaeda offshoot ISIS and its Sunni allies has swept through much of northern Iraq and declared a caliphate in the lands of Syria and Iraq they control. The U.S. has hinted a new government must be acceptable to Iraq's Sunni and Kurdish minorities. The country's leading Shia cleric has made a similar statement last week.

Maliki, however, has indicated he does not intend to relinquish his position.

US Rushes Hellfires to Iraq, Trying to Rebuild Arsenal

Tuesday looms as a hugely important day in the political process when the new parliament is expected to have quorum for its inaugural session. The first task will be to elect a speaker. That will then trigger a process for the selection of a new president within 30 days, which in turn will trigger the process for selecting a new prime minister, which must happen within 15 days. In all, this process could take around six weeks to complete, or if voting blocs have stitched-up back-room deals already, it could be wrapped up in a matter of days.

Political horse-trading has been unfolding over recent weeks, intensifying this week after the visit of U.S. Secretary of State John Kerry. All the key leaders in Iraq who met with Kerry agreed to try to meet the July 1timeline for commencing the constitutional process.

Perhaps the single most significant public development in this process so far is the meeting of the Shia Alliance on Saturday night, after which the coalition of parties declared itself the biggest single voting bloc in the parliament. This issues a direct challenge to Maliki's State of Law party, which holds 92 seats and is the single largest party in parliament.

The combination of seats belonging to the Shia Alliance may give them a mandate to form the new government and have the power to determine key positions, including the prime minister. It seems very unlikely, although not impossible, that post will go to Maliki, whose record leading the Shia dominated government has been seen as overly sectarian, leaving him incapable of reaching out to the Sunni and Kurdish communities.

In a climate of escalating sectarian violence in Iraq, Hakim told ABC News this week that the next prime minister "must represent the majority," which means from within the Shia Alliance. The new leader must also "be acceptable to the other partners, that's how we create the rhythm," he said.

There are between six and eight candidates for prime minister, sources told ABC News. The favorites among them appear to be the former vice president and finance minister Adel Abdul Mehdi, and Ahmed Chalabi, whose information about Iraq's alleged weapons of mass destruction was crucial to America's decision to launch the initial invasion of Iraq in 2003. The information he provided was ultimately discredited and he has since fallen from favor in the West. One of Maliki's key advisers is also in the frame, Tariq Najm. All three men are Shia.

Hakim acknowledged that Chalabi was among the names being considered but said "it's not about personalities, it's about being acceptable to the Shia alliance and the others. That's what we're talking about now, to find someone suitable for all."

Sources within the Shia Alliance have told ABC News the favored candidate for speaker is Saleem al-Jibouri, a senior Sunni lawmaker from Diyala. The preferred candidate for president is Barham Salih, who is the former prime minister of the Kurdish Regional government.