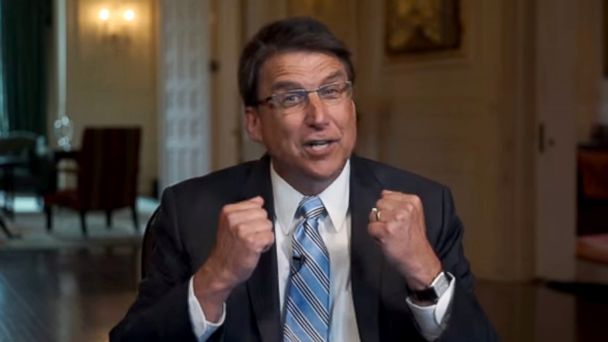 North Carolina Gov. Patrick McCrory announced an executive order today addressing concerns over the recently passed House Bill 2, which has been criticized as "the most anti-LGBT bill in the country."

"After listening to people's feedback for the past several weeks on this issue, I have come to the conclusion that there is a great deal of misinformation, misinterpretation, confusion, a lot of passion and frankly, selective outrage and hypocrisy, especially against the great state of North Carolina," McCrory said in a video statement. "Based upon this feedback, I am taking action to affirm and improve the state's commitment to privacy and equality."

House Bill 2, or HB2, which McCrory signed in late March, mandated that people use public bathrooms or changing facilities based on the "biological sex" stated on their birth certificates. Thus, transgender people in the state have been barred from using the bathroom corresponding to the gender with which they identify, unless they have had the sex listed on their birth certificates legally changed.

The bill also barred local municipalities from creating their own rules prohibiting discrimination in public places based on sexual orientation and gender identity.

McCrory signed Executive Order 93 today, which he says "clarifies" the bill and also "provides new protections for North Carolina residents," according to a news release from his office.

"Gender-specific restroom and locker room facilities" in government buildings and schools will remain in place, according to the order.

But the private sector can "establish its own restroom and locker room policies" and "non-discrimination employment policies for its own employees."

The order also extends the state's "equal employment opportunity policy to clarify that sexual orientation and gender identity are included."

McCrory said he will also seek "legislation to reinstate the right to sue in state court for discrimination."

LGBT advocates and community members have denounced the move as a deflective measure, which doesn't address some of their concerns with HB2.

"Gov. McCrory's actions today are a poor effort to save face after his sweeping attacks on the LGBT community," ACLU of North Carolina Acting Executive Director Sarah Preston in a statement. The group continues to call for the full repeal of HB2.

They said the measures, "fall far short of correcting the damage done when [McCrory] signed the harmful House Bill 2 into law which stigmatizes and mandates discrimination against gay and transgender people."

"With this executive order, LGBT individuals still lack legal protections from discrimination, and transgender people are still explicitly targeted by being forced to use the wrong restroom," Preston said.

"Efforts to divide the LGBT community by extending limited protections, but leaving in place the rules mandating discrimination against the transgender community will only strengthen our resolve to fight back against this discriminatory and misguided legislative action," Preston continued. "We call on Gov. McCrory and the North Carolina legislature to repeal House Bill 2 and replace it with full non-discrimination protections for all LGBT people."

McCrory acknowledged opposition to his executive order in the video statement, saying, "Now I know these actions will not totally satisfy everyone, but the vast majority of our citizens want common sense solutions to complex issues. This is the North Carolina way."