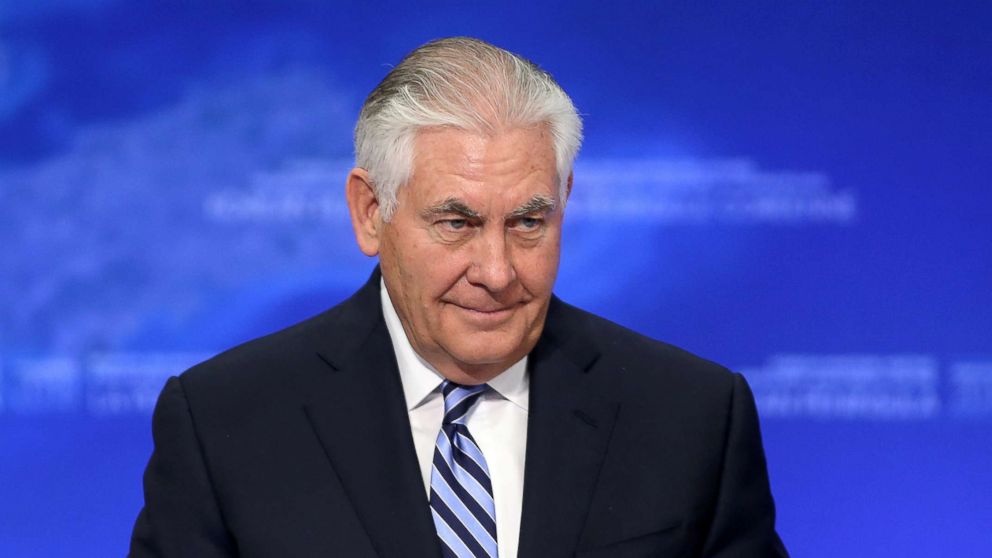 Secretary of State Rex Tillerson called on partners to maximize pressure on North Korea and combat the regime's attempts to evade international sanctions.

Sitting beside his counterparts from Canada, Japan and South Korea, Tillerson told top diplomats assembled in Vancouver, Canada, for a global summit on North Korea that they are sending a "unified message" to Kim Jong Un's regime: "We will not accept a nuclear-armed North Korea."

He urged nations to fully enforce the three United Nations Security Council resolutions from last year that increased sanctions on North Korea, specifically calling on Russia and China to comply.

"We cannot abide lapses or sanctions evasions," Tillerson said. "We will continue to call attention to, and designate, entities and individuals complicit in such evasive actions."

Tillerson also called for the improvement of maritime interdiction operations to "put an end to illicit ship-to-ship transfers that undermine U.N. sanctions," as well as "new consequences" to be imposed on the regime "whenever new aggression occurs."

North Korea launched 15 ballistic missile tests and conducted one nuclear test in 2017, but has yet to conduct a test in 2018.

Though Russia and China were not invited to Tuesday's summit, Tillerson did acknowledge that North Korea's nuclear weapons threat has joined nations that "were once enemies," specifically China and the U.N. Command Sending States, with a common goal to denuclearize the Korean peninsula.

"The sending states stand shoulder to shoulder with China, with the Republic of Korea, with Japan, with Russia -- and is joined with the entire international community in saying to the regime in North Korea that we cannot and will not accept you as a nuclear state," he said.

Tillerson rejected the "freeze for freeze" approach, in which military exercises would be suspended in exchange for North Korea halting its ballistic and nuclear weapons tests.

Tillerson mentioned that individuals on a Nov. 28 flight from San Francisco to Hong Kong last year witnessed part of a North Korean intercontinental ballistic missile (ICBM) test in the sky -- 280 nautical miles from where the missile landed in the Sea of Japan.

According to the Federal Aviation Administration (FAA), nine other flights were within that same range, he said.

"Over the course of that day, according to the Department of Defense, an estimated 716 flights were due to pass within that same range," Tillerson said. "The FAA says the total available seats on those 716 flights was 152,110. That's a lot of people from a lot of countries being put at risk by irresponsible testing of ballistic missiles."

ABC News first reported last summer that an Air France jet with 323 people on board flew past the location where a North Korean ICBM would land in the Sea of Japan less than 10 minutes later.

"Based on its past recklessness, we cannot expect North Korea to have any regard for what might get in the way of one of its missiles, or parts of a missile breaking apart. This is to say nothing of potential technological errors associated with a launch that could result in disaster," Tillerson said. "Of course this is hardly the only threat, or the likeliest threat, posed by North Korean missiles."
Report a correction or typo
Related topics:
abc newsnational
Copyright © 2022 ABC News Internet Ventures.
TOP STORIES
Crews responding to vegetation fire burning in Dublin
Authorities ID 2 women fatally struck by taxi cab in SF
ABC7's new 24/7 live stream offers local news, weather
Bay Area gas station charging nearly $8 a gallon
Red Flag Warning in effect for parts of Bay Area
Newsom threatens to impose mandatory water restrictions
Father puts 1,000 miles on his car to find specialty formula
Show More
SF LGBTQ+ police say they will not march in annual Pride Parade
Pfizer: COVID vaccine for kids 6 months to 5 years old 80% effective
Murdered for Millions | Watch full documentary
135-acre brush fire in Solano County 90% contained
Texas woman sought in fatal shooting of SF pro cyclist: US Marshals
More TOP STORIES News