In final week, CA recall election comes down to race between Gov. Newsom and Larry Elder 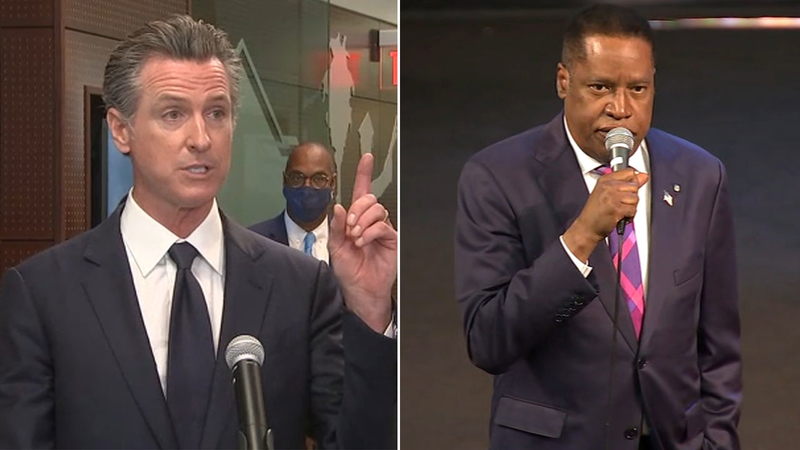 SAN FRANCISCO (KGO) -- In the final days of California's recall election, the effort that began well over a year ago and has led more than 40 candidates to jump into the race, has ultimately boiled down to two people: Governor Gavin Newsom and his GOP challenger Larry Elder.

In a campaign event in San Francisco on Tuesday, Gov. Newsom framed the race as a choice between him and the conservative radio host.

"It's been implied but let me be explicit," Newsom said at the Mission Language and Vocational School, "Either we vote no on this recall or in a matter of weeks the next governor of the state of California is Larry Elder."

Newsom added that he believes Elder is to the "far-right of Donald Trump."

“No recall! No recall!” volunteers chant as @gavinnewsom arrives & shakes hands with people at the San Francisco Mission Language and Vocational School pic.twitter.com/GyeIdIUwKs

The event, in San Francisco's Mission District, was aimed at turning out Latino voters, who so far have been slow to turn in their mail-in-ballots. Newsom warned if Elder becomes governor and revokes masks and vaccine mandates, it would be a set-back to the Latino community.

" No community would be more disproportionately impacted from a public health prism than the Latino community," Newsom said. "The power he (Larry Elder) has day one with an executive day one to eliminate those protections is profound, and I hope the community wakes up to that simple choice, because that's a choice you'll make."

RELATED: Recall election: Biden to campaign for Newsom in Calif. next week

The latest poll from the Public Policy Institute of California shows the recall effort is likely to fail, still Elder remains the frontrunner candidate to replace Newsom if it does pass.

According to ABC7 Insider Phil Matier, Elder becoming the frontrunner has been helpful for Newsom.

"What he didn't want is a moderate alternative to him. What he wanted was somebody who was definitely on the conservative side," Matier said. "The flip side is it's also bringing attention to Larry Elder and it's increasing his stature."

RELATED: Here's how to cast your vote in upcoming election

Elder has also made the campaign about Newsom. At campaign stops in Los Angeles, Clovis and Marina on Tuesday, he promised his supporters he would crack down on crime and help small businesses.

"People that run small businesses work 50, 60, 70 hours a week and because this man ignored science... a third of all businesses are now gone forever," Elder said in Clovis, referring to Newsom's stay-at-home order that kept many businesses closed or with limited capacity during the pandemic.

With just seven days to go until the recall election, Newsom and Elder are ramping up their get out of the vote efforts.

Vice President Kamala Harris will campaign with Newsom on Wednesday and President Biden will campaign in California next week. Newsom said he hopes these appearances will help galvanize Democrats and that they show "the consequential nature of this election."

Elder told reporters he doesn't think the appearances will make any difference.