RELATED: Where to watch and how NFL Draft will work as 'virtual' event

For the first time ever, the NFL Draft will run exclusively digital as the novel coronavirus pandemic has brought countless changes to the sports world.

College football hopefuls from across the country hope to hear their name called on draft day, thus making their NFL dreams come true.

This is true as well for players at Cal, San Jose State and Stanford.

We have compiled a list of all the eligible draft prospects from the Bay Area who may soon be on NFL rosters.

Traveon Beck, Cornerback
Traveon Beck started seven of his 43 games played for Cal after joining the squad in 2016. He totaled 77 tackles, four interceptions, 10 pass breakups and 14 passes defended. He went on to participate in the 2020 Hula Bowl after his time on the Golden Bears roster.

Ashtyn Davis, Safety
Ashtyn Davis is one of the top draft prospects for the California Golden Bears. The 6-1 200 pound safety from Santa Cruz is a versatile threat on defense and special teams. Davis originally walked on the Bears football roster after receiving a scholarship to run track at Cal. He competed in both sports and even won the 2017 Pac-12 Championship 110-meter hurdles event. Davis was one of three Cal players to participate in the 2020 NFL Scouting Combine and has a chance to hear his name called on day two of the NFL Draft.

Jordan Duncan, Wide Receiver
Jordan Duncan inserted himself into the starting lineup for his senior season and set career highs in catches and yards. In total, he leaves Cal with 19 starts, 62 catches for 782 yards receiving and eight touchdown grabs.

Jaylinn Hawkins, Safety
Jaylinn Hawkins is another dual-threat safety from Cal that has received plenty of national attention. He received an invitation to the 2020 NFL Scouting Combine after becoming a mainstay in the Cal secondary. Originally a wide receiver, Hawkins switched to safety in the spring of 2016 and turned into a ball-hawking defender with 10 interceptions, 17 passes defended and seven breakups. With special teams ability, experts see Hawkins as an undrafted free-agent signing.

Bay Area native Greg Thomas took a path through City College of San Francisco and Arizona State University before returning home to play for Cal. While there, he nailed 24 of 34 field goals attempted including the game-winner with 8 seconds to go in the game against Washington in his senior year. Thomas could get some calls as an undrafted free-agent.

Evan Weaver, Inside Linebacker
Evan Weaver can easily be considered the heart and soul of the Cal Bears team. Images of the linebacker hoisting the Stanford Axe after defeating their Bay Area rivals will go down in Cal lore. Weaver joined the Bears after being the defensive player of the year in the state of Washington. After switching from defensive end to linebacker, Weaver developed into one of the best defenders in the nation. He was named to first-team AP All-American and All-Pac-12 after leading the country in tackles. Heart alone is a reason to draft him, but his talents should land him on an NFL roster on draft weekend.

Ethan Aguayo, Linebacker
Ethan Aguayo will be remembered as one of the best linebackers to play for the San Jose State Spartans. Following in the footsteps of another great #31 at SJSU, Aguayo ninth on the all-time Spartan list for career tackles. He amassed 345 total to leave him eleventh on list of tackles among top active Football Bowl Subdivision players at the end of his senior season. With no invitation to the scouting combine, Aguayo may end up as an undrafted free-agent who will need to fight for a roster spot.
Brandon Ezell, Cornerback
Brandon Ezell played in two full seasons with the SJSU Spartans. In his time, he played on all three sides of the ball, but mostly at corner. He totaled 36 tackles and four interceptions for the Spartans.

Brett Foley, Tight End
Bretty Foley came to San Jose State by way of nearby Archbishop Mitty High School. Foley appeared in all 12 games for the Spartans in 2019 on offense and special teams. he finished with 17 catches for 195 yards and a score for the year.

Alex Galland, Punter
Alex Galland completed his bachelor's degree from Yale University in mechanical engineering before transferring for SJSU for his graduate season. He averaged 39.7 yards per punt for the Spartans with 17 of his 47 attempts ending up in the opponents 20 yard-line.

Chandler Hawkins, Safety
Chandler Hawkins saw his role on the Spartans decline as his career went on. In 37 games played, he had 37 tackles, mostly on special teams. He is also a multiple time All-Mountain West Academic award winner.

Troy Kowalski, Offensive Lineman
Big Troy Kowalski played all across the line while at San Jose State. He was a four-season starter, starting 45 of his 48 games as a college athlete. In his senior year, he was an honorable mention All-Mountain West player due to his production that helped the SJSU line only give up 14 quarterback sacks on 498 pass attempts. He can squat 645 pounds and dead lift 635. A strong, versatile lineman always has a place in the NFL.

Sailosi Latu, Defensive Tackle
If you went to a San Jose State football game, you heard Sailosi Latu's name a lot. The big man in the middle started all 12 games for the Spartans and had 54 tackles from the nose tackle position. At 6-3 334 pounds, Latu has the size to plug gaps in the NFL if a team takes a chance at him on draft weekend.

Josh Love, Quarterback
Josh Love came in as a walk-on for the Spartans and ended as one of the best players in San Jose State history. The 2019 Mountain West Offensive Player of the Year led the Spartans to the first win over a SEC opponent in school history and finished the year knocking off rival Fresno State to reclaim the Valley Trophy. Love finished third all time in SJSU history with 7,206 yards, fourth all time in completions with 578 and seventh all time in total offense with 6,924. It may be difficult for Love to hear his name on draft day with other talent in the QB class, but he will be on a roster come NFL Training Camp in the summer.
Quinn Oseland, Offensive Lineman
Quinn Oseland transferred to SJSU from Minnesota where he played during the 2015-2018 seasons. Oseland worked alongside an offensive line that helped lead the way for one of the most prolific passing seasons in Spartan history.

Jesse Osuna, Linebacker
Jesse Osuna made the trip from Morgan Hill, Calif. and Live Oak High School to SJSU where he became a feared tackler over the middle of the field. He started 20 games for the Spartans and finished with 10 or more tackles in six contests. His best season at the college level came in his junior campaign where he started all 12 games and finished with a team best 10 tackles for loss and three fumble recoveries.
DeJon Packer, Running Back
DeJon Packer took the James Jones route to SJSU by way of Gunderson High School. As a Spartan, Packer scored 15 total touchdowns with 12 of them coming in his senior season. Packer had multiple touchdowns four times in 2019. His 17 carries for 93 yards and a score against Fresno State helped SJSU earn the victory.

Zamore Zigler, Cornerback
Zamore Zigler was another dual-threat player for San Jose State. He scored five touchdowns offensively for the Spartans and finished with 39 total tackles in 43 career games played.

Richard McNitzky, Long Snapper
Richard McNitzky was the starting long snapper for the Stanford Cardinal in the 2019 season. His performance netted him a semifinalist nod for the Patrick Mannelly Award. Long snappers are one of the most underrated positions in football. You only truly know your snapper when he messes up. You didn't see McNitzky mess up much while on the Farm. If he could land on a NFL roster, he could last a long time in the league.

Colby Parkinson, Tight End
Colby Parkinson enters the draft in 2020, foregoing his senior year at Stanford. He is also the top prospect to come out of Stanford this year and earned an invitation to the 2020 NFL Scouting Combine. The Cardinal has produced some of the top tight ends in football, including the highest paid TE in NFL history. Parkinson follows right in line with the rest. He was a John Mackey Award semifinalist, the honor that recognizes the nations top tight ends. 87 catches, 1,171 yards and 12 touchdowns were Parkinson's final numbers as a collegiate athlete. Parkinson can hear his name sometime on day three of the NFL Draft.

Cameron Scarlett, Running Back
Cameron Scarlett was the Stanford team MVP thanks to his performance in his fifth year with the Cardinal. leading the team in touchdowns, 8, Scarlett filled in the role left by Bryce Love nicely to keep the offense running for Stanford. Scarlett finished in the Cardinal top-20 all-time with more than 1,600 rushing yards for Stanford. In 50 career games, he scored 25 touchdowns, rushed for 1,676 yards and added 523 receiving yards on 41 catches. Scarlett could land on a NFL roster as an undrafted free-agent.

Casey Toohill, Outside Linebacker
Casey Toohill was a force for the Stanford defense for multiple seasons. He not only had his best season of his career in 2019 on the field, but off the field, he was named a finalist for the William V. Campbell Trophy. The award highlights scholar-athletes for combined academic and football success. His second-team All-Pac-12 selection helped him earn an invitation to the 2020 NFL Scouting Combine alongside his teammate Colby Parkinson. Stanford linebackers have seen plenty of success in the league and Toohill can see similar success while rushing the passer at the next level. He will need to get bigger and stronger to fill out a NFL frame and make an impact in the professional ranks. Look for his name to be called as an undrafted free-agent.
Report a correction or typo
Related topics:
sportssan josesan jose state universitystanford universitypalo altoberkeleyuc berkeleynfl draftstanford cardinalcommunity journalistnflsjsuuc berkeleyfootballsan jose state spartanscalifornia golden bearssjsu spartans
Copyright © 2020 KGO-TV. All Rights Reserved.
NFL DRAFT 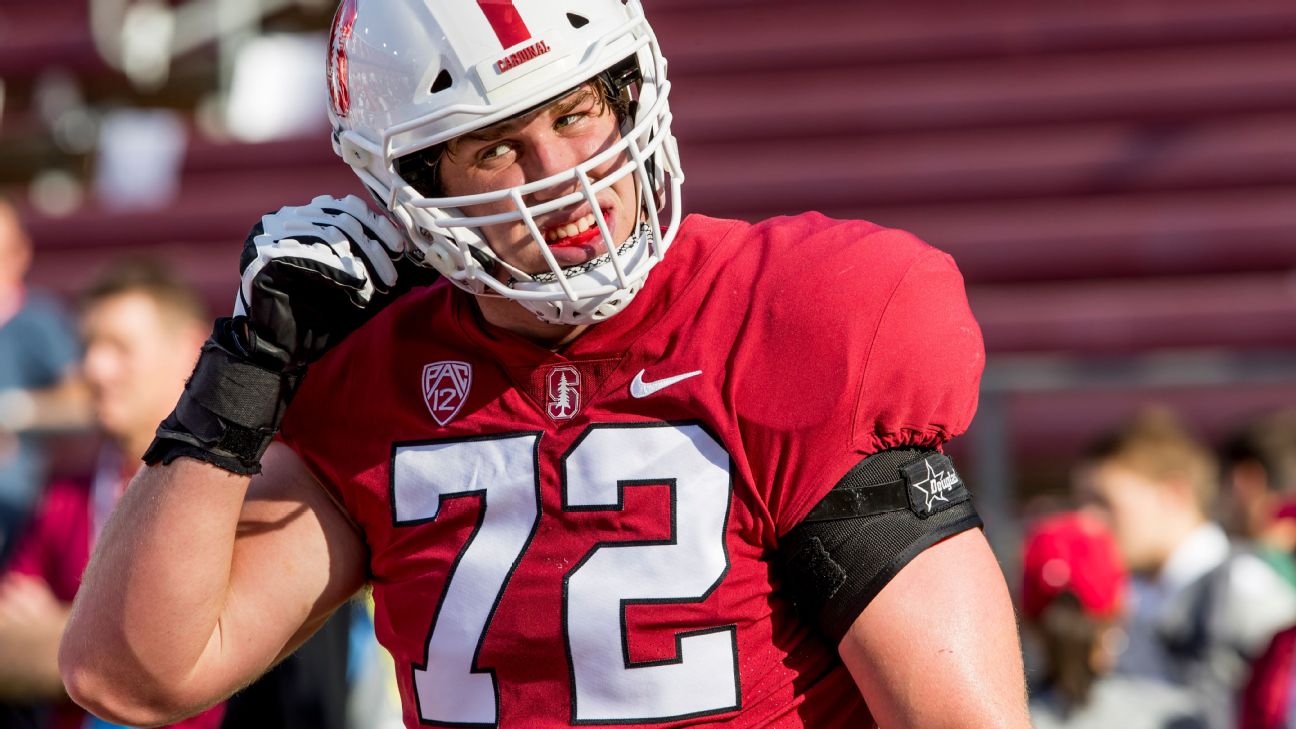