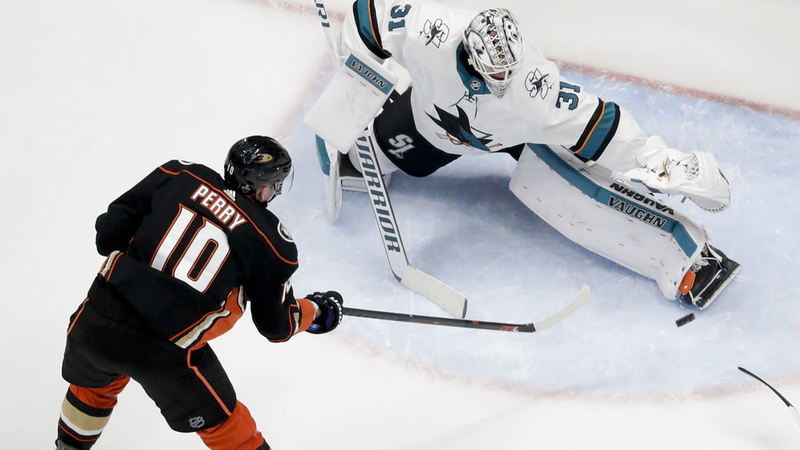 SAN JOSE, Calif. (KGO) -- Playoff game number three is hours away with the Sharks up two for two against the Ducks of Anaheim. Sharks fever is evident in downtown San Jose with fans wearing teal and reflecting optimism for another win Monday night.

"I think the Sharks have been playing a great game the first two games," said fan Phil Kearney. "They're playing a faster game than they have in the past whereas the Ducks are big and, sure, they're aggressive but the back checking of the Sharks has really negated a lot by the things the Ducks are trying to do."

RELATED: SJ Sharks to face off against Ducks in first home playoff game

As strange as the weather has been on Monday, the sun was shining brightly on iron arch over the entrance to San Pedro Street. The San Jose Sharks name is on display on both sides of the arch. The sun kissed sign could be a good omen.

"Winning the first two on the road, that's huge," said fan David Massey. "Can't ask more than that. Back at home, home crowd, Tank always turns up... Should be good."

We were surprised to find out another fan wearing a teal shirt is from Edmonton, Alberta. He admits his buddies back home, who are big Oilers fans, question his loyalty.

"I always liked the Sharks, but it was Patrick Marleau for me," said Padon Brenholen. "So it hurts a little bit when he left. Don't talk much about him anymore." He's referring to the former Sharks' star who left for the Toronto Maple Leafs.

The Sharks will keep fans entertained ahead of the game with a street rally along Autumn St., adjacent to SAP Center. Fans will be able to buy beer for $6 with proceeds going to the Sharks Foundation. There will be a DJ, face painters and food trucks, of course.

For others, downtown watering holes, such as O'Flaherty's Irish Pub, expects about 150 people to show up before the game. It's a big shot in the arm for business.

"Even if they don't have tickets for the game," said proprietor.David Mulvehill, "they still want to come downtown to be part of the action, come to the pub and watch the game, so that's great."