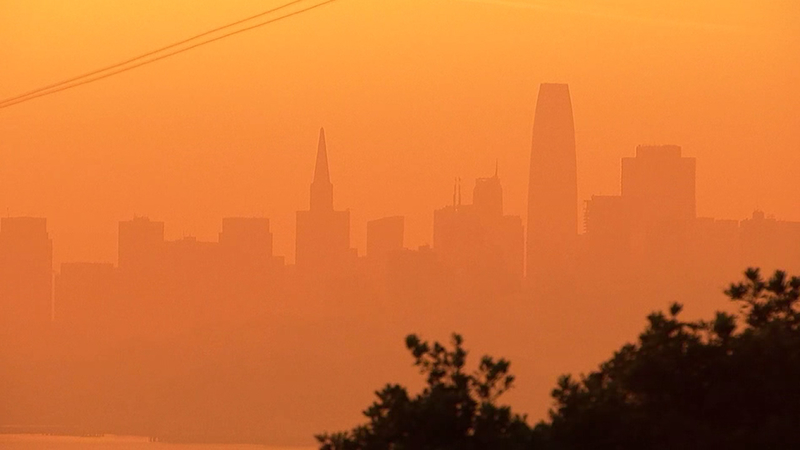 SAN FRANCISCO (KGO) -- There's a Spare the Air Alert in effect for Monday, with poor air quality forecasted in the North Bay, Coast and Central Bay, and Inland East Bay.

In the morning, San Francisco and East Bay residents woke up to a hazy skyline and smoke-filled air. Bay Area Air Quality Management District spokesperson Kristine Roselius says those areas are currently experiencing an "unhealthy" range for sensitive lung groups and will reach momentary spikes into the unhealthy range throughout the day.

She also said San Francisco and the East Bay are mostly seeing smoke from a different fire, not the Kincade Fire.

"It's from a fire in the Suisun area," she said. "It's a marsh, so it's burning a lot of organic material."

According to Roselius, they are expecting spoke from the Kincade Fire to start coming down to the North Bay and spread out across the region.

With a weak sea breeze, the smoke from the Sonoma County wildfire will be more concentrated in the North Bay and will drift southeast to the rest of the Bay Area. Residents are being advised to limit time outdoors, keep air conditioning on recirculate, and avoid strenuous activities especially for sensitive people with asthma.

The Red Flag Warning with the strong Diablo winds expires Monday morning because the winds will decrease rapidly, shifting from offshore to a slight onshore pattern.

RELATED: Here are the fires burning in Bay Area today

Residents of cities in western and central parts of Contra Costa County, especially those with respiratory sensitivities like asthma, are urged to stay inside. Air quality in these areas have been measured at unhealthy levels this morning as a result of smoke from large fires burning in the region. A health advisory issued last night for eastern parts of Contra Costa County has been lifted. Other areas in the county may be impacted by the smoke as wind conditions change.

We won't be out of the woods yet, because another round of Diablo winds on Tuesday night into Wednesday will increase fire danger once again.

Roselius says the best defense is for people to stay indoors rather than purchase and wear a smoke mask.

Roselius says they are expecting another wind event tomorrow and right now is too early to predict what the smoke levels will be from the Kincade Fire.

Go here for the latest updates and information on the Kincade Fire.