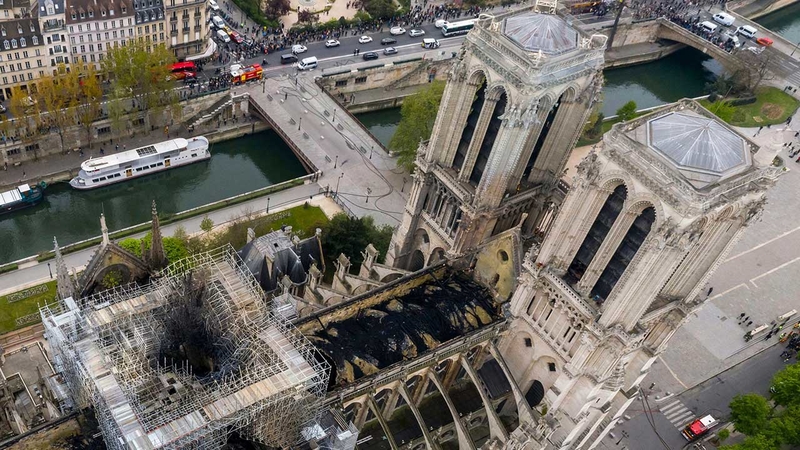 Notre Dame fire: Fire out but much work ahead for destroyed Notre Dame

The official, who spoke anonymously about the ongoing investigation, said investigators still don't have the green light to work in the cathedral and search in the rubble for safety reasons.

He told The Associated Press the monument is still being consolidated with wooden planks to support some fragile parts of the walls.

On Monday, the storied Paris landmark caught fire in what is being treated as an accident. The massive fire burned for 12 hours, sending up plumes of smoke visible across the city.

France paid a daylong tribute Thursday to the Paris firefighters who saved the internationally revered Notre Dame Cathedral from collapse and rescued many of its treasures. As the ceremonies took place, construction workers hurriedly secured key sections of the fire-weakened cathedral, including an area above one of its famed rose-shaped windows.

Several hundred Paris firefighters, who are members of the French military, filed into the presidential Elysee Palace courtyard for a gathering hosted by President Emmanuel Macron to share what his office said were "words of thanks." Top government ministers also attended.

SEE ALSO: Notre Dame cathedral fire: Before and after photos of fire damage

Paris City Hall was holding a ceremony in the firefighters' honor later in the day, with a Bach violin concert, two giant banners strung from the monumental city headquarters and readings from Victor Hugo's The Hunchback of Notre Dame.

Among the firefighters being honored Thursday is Paris fire brigade chaplain Jean-Marc Fournier, who says he was falsely credited with helping salvage the crown of thorns believed to have been worn by Jesus at his crucifixion.

The chaplain says a team of rescuers broke the relic's protective covering and an official who had the secret code to unlock the protection finished the job. Fournier told France Info on Thursday that his own team arrived on the heels of the salvaging and praised the action "to preserve this extraordinary relic, this patrimony of humanity."

However, Fournier told the daily Le Parisian that he himself was able to save the most precious thing for Catholics from the fire, the cathedral's consecrated hosts. The paper said he climbed on altars to remove large paintings, but that he felt especially proud of another personal salvaging operation: "to have removed Jesus" from the Cathedral.

Among others honored is Myriam Chudzinski, one of the first firefighters to reach the roof as the blaze raged. Loaded with gear, they climbed hundreds of steps up the cathedral's narrow spiral staircase to the top of one of the two towers. She had trained at the site for hours for just this moment.

"We knew that the roof was burning, but we didn't really know the intensity," she told reporters. "It was from upstairs that you understood that it was really dramatic. It was very hot and we had to retreat, retreat. It was spreading quickly."

She heard a roar, but her focus was on saving the tower. She learned later that it was the sound of the spire collapsing.

Fire officials warned that the massive cathedral still remains very fragile and extremely dangerous for construction workers and other specialists. On Thursday, workers using a crane were removing some statues to lessen the weight on cathedral's fragile gables, or support walls, and to keep them from falling, since the section lacked the support of the massive timber roof that burned up in Monday's evening's devastating blaze.

They were also securing the support structure above one of Notre Dame's rose windows with wooden planks.

French President Emmanuel Macron said Tuesday in a televised address to the nation that "we will rebuild Notre Dame cathedral even more beautiful."

He added that "we can do it and once again, we will mobilize" to do so.

Macron, who also said "we have so much to rebuild," thanked firefighters and police and donors who are giving money for the renovation.

He wants to rebuild the cathedral within five years - in time for the 2024 Summer Olympics that Paris is hosting. Experts say the vast scale of the work to be done could easily take 15 years, since it will take months, even years, just to figure out what should be done.

Pierluigi Pericolo, in charge of restoration and security at the St. Donatian basilica in Nantes, said it could take two to five years just to secure Notre Dame, given its size.

"It's a fundamental step, and very complex, because it's difficult to send workers into a monument whose vaulted ceilings are swollen with water," he said on France-Info. "The end of the fire doesn't mean the edifice is totally saved. The stone can deteriorate when it is exposed to high temperatures and change its mineral composition and fracture inside."

Though an official told ABC News that it will likely be at least three years before members of the public are able to visit the Notre Dame Cathedral again, a bishop later said it would be up to six years.

Bishop Patrick Chauvet, the church's rector, said "a segment of the cathedral has been very weakened" by the devastating fire. He did not elaborate which section he was talking about.

He added it was unclear what the church's 67 employees would be doing in the future.

An initial fire alert was sounded at 6:20 p.m., as a Mass was underway in the cathedral, but no fire was found. A second alarm went off at 6:43 p.m., and the blaze was discovered to be consuming the roof.

Remarkably, no one was killed in the fire after firefighters and church officials speedily evacuated those inside. More than 400 firefighters took part in the nine-hour battle to save the 12th-century Notre Dame on Monday. Its spire collapsed and roof was destroyed, but its iconic towers, rose windows, famed organ and precious artworks were saved.

Investigators so far believe the fire was accidental, and are questioning both cathedral staff and the workers who were carrying out renovations to the cathedral before the fire broke out. Some 40 people had been questioned by Thursday, according the Paris prosecutor's office.

The building would have burned to the ground in a "chain-reaction collapse" had firefighters not moved as rapidly as they did to battle the blaze racing through the building, José Vaz de Matos, a fire expert with France's Culture Ministry, said Wednesday.

At least $1 billion has already poured in from ordinary worshippers and high-powered magnates around the world to restore the fire-ravaged Notre Dame Cathedral in Paris, after the French president set a controversial five-year deadline to get the work done.

A communique said that the Arnault family were "in solidarity with this national tragedy, and join in the reconstruction of this extraordinary cathedral, a symbol of France, of its heritage and togetherness."

PHOTOS: A look inside Notre Dame Cathedral during the fire

Oil and gas giant Total said it would contribute 100 million euros "to help the reconstruction of this architectural jewel."

Cosmetics maker L'Oreal promised the same amount to rebuild "a symbol of French heritage and of our common history."

Among other contributors, Bouygues construction group CEO Martin Bouygues said he and his brother Olivier would donate 10 million euros.

MORE ON THE ICONIC LANDMARK

Built in the 12th and 13th centuries, Notre Dame is the most famous of the Gothic cathedrals of the Middle Ages as well as one of the most beloved structures in the world.

Situated on the Ile de la Cite, an island in the Seine river, its architecture is famous for, among other things, its many gargoyles and its iconic flying buttresses. Some 13 million people visit it every year.

It is the subject of countless stories and works of art, notably Victor Hugo's novel, The Hunchback of Notre Dame, which helped rally support for Notre Dame's massive renovation in the 19th century and which was later adapted into an animated Disney movie. After the fire, the original version of the novel shot to the top of the Amazon bestseller list in France and also climbed to the top of the historical fiction category in the U.S.

Among the most celebrated artworks inside are its three stained-glass rose windows, placed high up on the west, north and south faces of the cathedral. Its priceless treasures also include a Catholic relic, the crown of thorns, which is only occasionally displayed, including on Fridays during Lent.

"It's not one relic, not one piece of glass - it's the totality," said Barbara Drake Boehm, senior curator at the Metropolitan Museum of Art's medieval Cloisters branch in New York, her voice shaking as she tried to put into words what the cathedral meant. "It's the very soul of Paris, but it's not just for French people. For all humanity, it's one of the great monuments to the best of civilization."

"It's been 800 years that the Cathedral watches over Paris," Pascal said. "Happy and unfortunate events for centuries have been marked by the bells of Notre Dame."

He added: "We can be only horrified by what we see."

RELATED: Notre Dame Cathedral: Before and during the fire

ABC News contributor Alastair Bruce said it may take many years for the church to be rebuilt.

"I would imagine that this is the greatest tragedy to the arts of France that we are witnessing now, and it will take almost 100 years to put it right," he said.

REACTIONS FROM PARIS AND BEYOND

Macron posted on Twitter in French with a message that translates to, "Notre-Dame de Paris in flames. Emotion of a whole nation. Thought for all Catholics and for all French. Like all our compatriots, I am sad tonight to see this part of us burn."

Crowds stopped in their tracks along the Seine River, which passes under the island where the cathedral stands.

Eyewitness John Dickas told ABC News it is heartbreaking for bystanders who are watching the efforts to fight the blaze.

"For me, the most heartbreaking moment was when I saw - about 20 minutes after I started watching the fire - I saw the ladders go up and the hoses start spraying," he said. "It was just heartbreaking to watch. The ladders were not tall enough. The hoses were not strong enough. This was, just clearly, a fire beyond the capacity of the crews' capability. I mean, they were clearly doing everything they could. It was just so much bigger and so much more out of control than they had the resources to deal with."

Paris Mayor Anne Hidalgo said in a Twitter message that Paris firefighters were still trying to limit the fire and urged Paris citizens to respect the security perimeter that has been set around the cathedral.

Hidalgo said Paris authorities are in touch with the Paris diocese.

Reactions from around the world came swiftly including from the Vatican, which released a statement expressing shock and sadness for the "terrible fire that has devastated the Cathedral of Notre Dame, symbol of Christianity in France and in the world."

In Washington, Trump tweeted: "So horrible to watch the massive fire at Notre Dame Cathedral in Paris" and suggested first responders use "flying water tankers" to put it out.

Cardinal Timothy Dolan, the archbishop of New York, said he was praying "to ask the intercession of Notre Dame, our Lady, for the Cathedral at the heart of Paris, and of civilization, now in flames! God preserve this splendid house of prayer, and protect those battling the blaze."