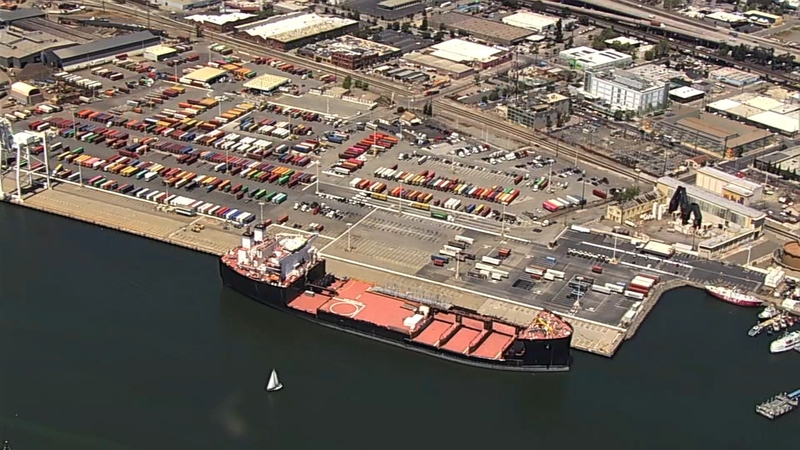 OAKLAND, Calif. -- Oakland officials have released the final environmental impact report for the Howard Terminal on the proposed new stadium for the Oakland A's at Howard Terminal.

City officials will recommend to the Oakland Planning Commission that it certify the report and send it to the City Council for approval.

The Planning Commission will take up that recommendation on Jan. 19 and the City Council may approve the report in February.

"Releasing the final Environmental Impact Report is a major milestone on our path to build a new waterfront ballpark district that will create up to 18 acres of beautiful public parks, more affordable housing, and good jobs for Oaklanders," Oakland Mayor Libby Schaaf said.

"The 3,500-page document is thorough and exhaustive, and it ensures that the project is environmentally safe and sustainable," Schaaf said. "The completion of the EIR also keeps us on track to bring the project for a final vote to the City Council in 2022 -- and brings us one step closer to keeping our beloved A's rooted in Oakland."

The final EIR does not contain any "significant" new information, which means it will not have to be recirculated, thereby delaying a vote on it.

The A's proposal includes not only a new stadium seating about 35,000 people, but housing, a hotel, and a 3,500-seat performance venue as well as commercial space.

The entire development would sit on about 55 acres in the Jack London Square area.

Approving the entire project consists of an environmental review, project review and project agreements. The city and the A's are far along in the approval process, though the A's have been considering moving the team to Las Vegas.

A's President Dave Kaval has said that it's Howard Terminal for the A's or they are moving out of Oakland.

City Council approval of the final EIR would wrap up the environmental review process.

City officials are waiting for the A's to revise and submit plans to the city as part of the project review process. The two are now drafting and negotiating the project agreements, which are financial in nature.

A lawsuit could delay the project, but for a limited amount of time. Assembly Bill 734 sets a limit on the length of time a suit over the project could be litigated.