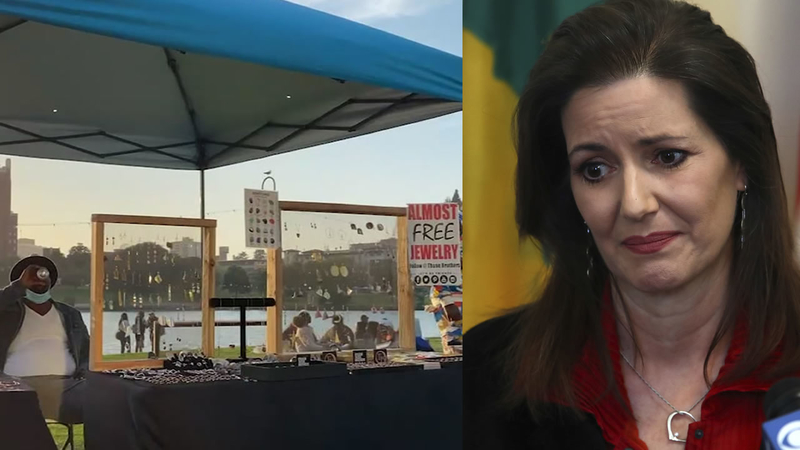 'Pisses me off': Oakland mayor opens up amid pandemic

OAKLAND, Calif. (KGO) -- Video showing out-of-town vendors at Lake Merritt amid the coronavirus pandemic is a growing concern for Oakland officials and Mayor Libby Schaaf shared that "it pisses me off."

"Now listen, I am always looking for a win-win, and I recognize that people want to be outdoors," Schaaf said on ABC7's "Midday Live." "It is healthier to be outdoors as long as you're keeping social distance, wearing that face mask and obsessively washing your hands. Outdoors is a healthier place to be, but what pisses me off, is when out-of-town vendors come to Oakland, advertise on social media, try and create a dangerous party atmosphere just to make a profit. We cannot allow out-of-town business people to profit off compromising our public health in Oakland. That is not acceptable."

COVID-19 cases are skyrocketing in Oakland, especially East Oakland, and officials are blaming it on parties and social gatherings.

The parks and rec advisory commission will be addressing the issue on Wednesday afternoon and Schaaf said they hope to create a safe space for local vendors. Schaaf emphasized the space would be for Oakland vendors only as a way to support local businesses, not at the expense of public health.

Some criticized that public restrooms and cleaning stations give people reason to come to the lake. Schaaf argued closing streets and limiting parking availability at Lake Merritt are ways the city is trying to limit crowding, not encourage it.

In other Oakland news, the school district announced they reached a tentative agreement with the teacher's union on a distance learning model. Though the academic year already started on Monday, Schaaf expressed her delight that an agreement was finally made.

"I'm so happy about that. School just started this week. It is the most bizarre first day of school I've ever gone through, not just as the mayor," she said. "But as a parent, you know, I've got a couple distance learners here in my house. So I'm just relieved that we are all moving forward. But let us all just give each other grace. These are really difficult decisions."

The mayor is not aware of the specific details.

"I have not heard the final number but the sides we're not that far apart. So I am sure that whatever it is it's going to be best for our children," she said. "And that's what matters."

"She is a fighter," Schaaf said about Kamala. "She is someone who's gonna generate excitement on that campaign trail. But she's also going to be a great partner to Joe Biden. And when I got an opportunity along with other California leaders to actually make the case for Kamala Harris with the vice presidential selection committee, it was interesting to me that that's what we all talked about, like what a nice person she is."

Oakland native, Senator Kamala Harris, is stirring up mixed emotions after locking down her position as Joe Biden's running mate.

Schaaf added that Kamala was by her side when her house was vandalized a few weeks ago.

"She is so loyal and kind and compassionate. She's one of the first people who called me when when my house got vandalized a couple weeks ago, just to ask me how my family was doing. And so that's who Biden needs a totally supportive partner behind the scenes and someone who has he said is simpatico, but who is gonna fight like hell."

"I just could not be more thrilled and proud because she's from Oakland," Schaaf said.

Watch the full interview with Mayor Libby Schaaf in the media player above.

WATCH LIST: 38 California counties where COVID-19 is getting worse