KGO
By Kris Reyes
OAKLAND, Calif. (KGO) -- Students and staff at McClymonds High School in Oakland are still without a school, as air testing continues for TCE (trichloroethylene), a cancer-causing chemical.

The carcinogen was found in the groundwater in a nearby property at a level that could vaporize into the air.

"Today, we were angry as well. We didn't really get anywhere," said parent Bee Hendricks.

Like many parents, she's worried about more than just the safety of the students. Her son is a junior he plays football but right now he's home without sports, or grades.

"The scouts look at your grades and what you've been doing in your junior year because they wanna know if they even want to talk to you in your senior year," she said.

Students have been sent home with school work. Classes are set to resume Tuesday but at three different locations, all within a couple miles of McClymonds.

McClymonds will remain closed as air testing on property continues. Final results are expected at the end of the week.

"The good news is that preliminary test results we had on Saturday showed exactly what we were hoping and that's 0% TCE throughout the school," said John Sasaki with Oakland Unified School District.

Parents have been both angry and confused about the process. The school shut down last week after TCE was found in ground water near the school, and officials have yet to trace where it came from.

But, there are several hazardous waste sites in West Oakland.

"We're hesitant to allow them to go back because you know we're not sure what's the acceptable level of this," said William Harris, another parent.

Sasaki added that they are still in the process of bringing in more experts to address parent questions, especially considering two high profile cases of cancer at the school that lead to two student deaths in recent years.

"We know there's all kinds of distrust and rightfully so, this is a situation where people of color have frankly always gotten the shaft in our county and we need to change this," said Sasaki.

RELATED: What is TCE?: Here's what you need to know about chemical detected near McClymonds HS
Report a correction or typo
Related topics:
oaklandhazmatchemicalsu.s. & worldschool closureschemical spill
Copyright © 2021 KGO-TV. All Rights Reserved.
RELATED 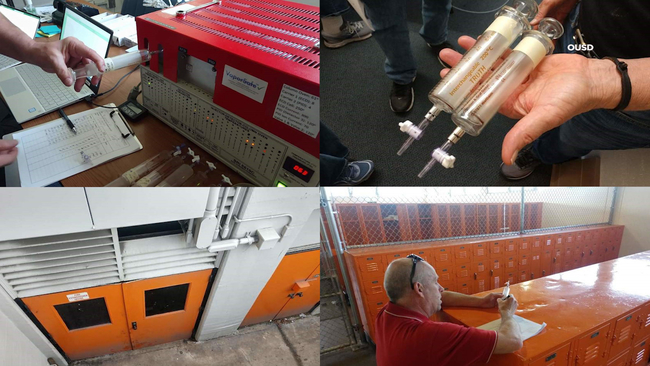