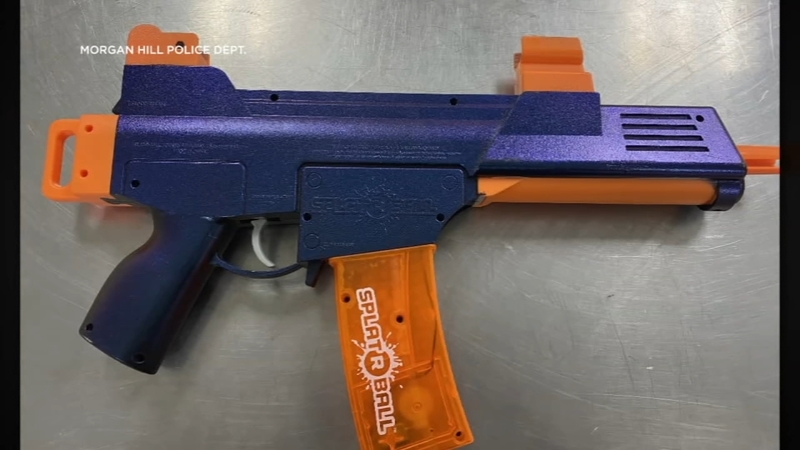 The behavior is being tied to a viral social media trend called the "Orbeez challenge," which encourages people to fire projectiles at unsuspecting victims.

However, what TikTok users might consider a new social media challenge, is landing teens in some real trouble.

MHPD said two people walking along East Main Avenue were hit with gel balls - or Orbeez - shot from a blaster gun and fired from a moving car. Orbeez is the name of the brand that makes the water beads.

These gel or water-based pellets hit one person in the head, another in the arm.

"If someone's struck in the face, or in the eye - some softer membrane, you know, especially the eye - that's gonna cause some significant, significant damage," MHPD Sgt. Scott Purvis told ABC7 News.

Resident Matt Loewenstein added, "Or worse, you know. I mean, if you're on a bike and you get hit with something like that, you can fall off go into on-coming traffic. Who knows what would happen."

Loewenstein and others say there is real concern, especially since this is the third similar incident to happen in the past two weeks.

Purvis said the department does not believe the incidents are connected.

He said in Thursday's investigation, MHPD was able to identify the car involved, and later found the teen driver at home with a Splat-R-Ball blaster gun in the backseat of his car.

He was then arrested and booked into Santa Clara County Juvenile Hall on charges of P.C. 246.3(b)(c) - Discharge BB device in a grossly negligent manner.

"It's sold as a toy for children five years and up," he said. "So the accessibility is extremely easy for anybody to go out and purchase these."

He says the department doesn't have any direct evidence that Thursday's case was related to the TikTok challenge. However, he said PD believes it is likely, seeing social media encouragement to shoot strangers.

"It's what we're seeing going on in the national environment regarding these, these Orbeez incidents," he added.

"You never want that to happen in any neighborhood. Not your own, or anywhere else," resident Ken Oliver told ABC7 News. "On the other hand, it's not going to stop me from going out on my evening walk and such. I don't think it's systemic or a big problem."

The TikTok trend involves kids vandalizing bathrooms in their schools so badly, some are being closed.

However, others do consider viral social media trends that glorify harming others a huge problem.

"That's crazy! That's just crazy," resident Samantha Cerniglia shared. "I don't get this TikTok challenge stuff. You know, the kids just... I don't know, they need something else to do."

MHPD is asking parents to speak with their children about the serious dangers and consequences of this criminal behavior.