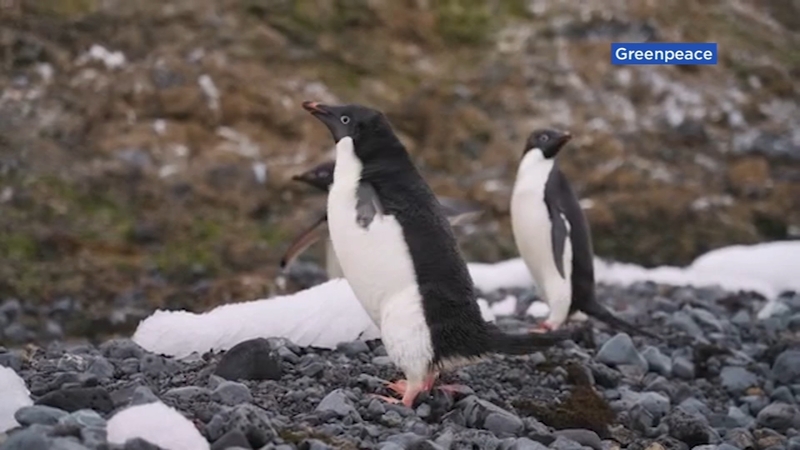 SAN FRANCISCO (KGO) -- Penguins can't speak English. They can't tell us they need help. They can only adapt to their environment -- and that environment is rapidly changing.

Greenpeace campaigners and scientists from Stony Brook University are in the Antarctic, on this Penguin Awareness Day, and they're seeing firsthand what the climate crisis has done.

Expedition lead Louisa Casson says they just found a new colony of penguins where they didn't expect to find them. The crew counted 75 Gentoo penguin chicks at the farthest southernmost point that's ever been reported on the eastern Antarctic Peninsula.

"This is important because this species used to only be able to breed further north. This area was far too icy to raise chicks. This is a clear indication that the climate crisis is continuing to effect this region and really underlines the need for urgent protection for these new penguin habitats and the Antarctic Ocean at large," Casson said.

The crew is also discovering some species are declining because of the disappearing sea ice, while others are increasing due to rising temperatures. The western side of Antarctica is one of the fastest warming places on the planet. Collapses in some penguin populations have already been reported there.

"In this region we're in right now, the Weddell Sea, governments have been discussing a proposal to create a marine protected area here for years and yet every single year they keep failing," Casson said. "They have no problem with allowing industrial fishing to be happening around the Antarctic peninsula, but when it comes to creating protective areas they are moving at a glacial pace. That needs to change and this needs to be the year."

Casson says wildlife is facing too many threats and a network of ocean sanctuaries is needed right now.