Is there a better way to police? One California city may have found the answer 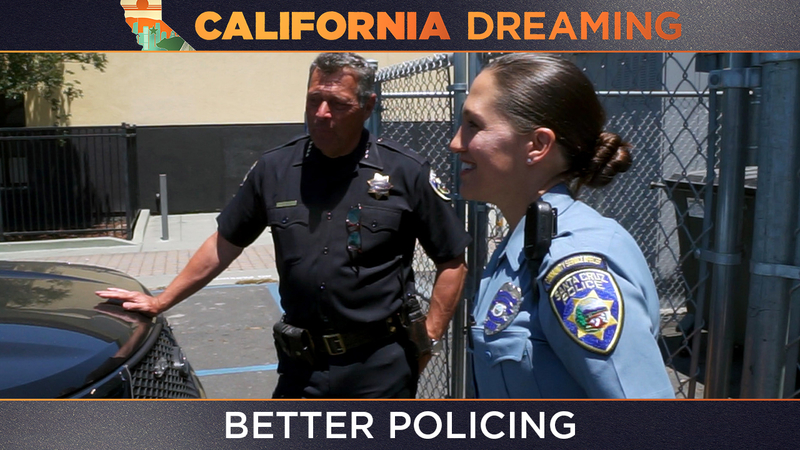 Officers without guns? One California city gives it a try

SANTA CRUZ, Calif. (KGO) -- As the state legislature considers dozens of police reform bills, including one that would strip officers of their badge for misconduct, many California cities are also rethinking the role of their police officers.

Many departments have implemented a form of community-oriented policing. That can mean different things for different departments.

But community policing has evolved with the nation's renewed focus on police accountability, according to Hofer.

RELATED: How the home-sharing economy is helping break the prison cycle in California

Many departments are turning to community policing as an alternative to law enforcement to deal with mental health problems and domestic conflicts.

In 2018, the city of Santa Cruz launched its Neighborhood Policing Teams which rely on unarmed officers to solve certain crimes or nuisance complaints.

"With neighborhood policing, we work with the community to understand the problems associated with that neighborhood. Maybe they want a park to have a reduced influence of people using drugs in that park," said Santa Cruz Police Chief Andrew Mills.

Lupita Alamos saw the team in action after she called police because of safety issues near the Santa Cruz Metro Center.

Alamos and her colleagues at the Santa Cruz Finance Department reported people using drugs and urinating in the building's parking lot.

Officer Brothers met with the workers to learn about their concerns and came up with strategies to improve safety.

"The goal was to create passive deterrence to allow the environment to control itself," said Officer Brothers, who came up with a plan to improve the landscaping, install some low-level fencing and signage about rules of conduct in the lot.

"We wanted to create a less desirable place for people to loiter," explained Officer Brothers.

The strategy has proved effective.

"I felt like the approach dealt with issues at the root by eliminating areas for people to hide and loiter," said Alamos.

The approach is a clear departure from another crime prevention program abandoned by the police department in 2017.

Predictive policing used a computer program to analyze crime data to predict where future crimes might happen. The data might include where a crime happened, what time it happened, what time of crime it was and in some cases, the weather at the time the crime occurred.

"Data is critically important for police to use because you want to make sure that what you're doing is effective. The problem arises if you're using data as your form of policing," said Chief Mills.

Predictive policing has been criticized for being racially biased and for over-policing predominately Black and Hispanic neighborhoods.

"Way more Black people are getting pulled over than they should be. If we use traffic stops to feed the algorithm, it's just going to perpetuate the same bias," said Hofer, who also chairs Oakland's Privacy Advisory Committee, which lobbied to ban predictive policing and biometric surveillance in the city.

Chief Mills said the department chose to get rid of predictive policing because of concerns it kept putting officers in Latino and Black neighborhoods.

"There is a better way to police," said Chief Mills.