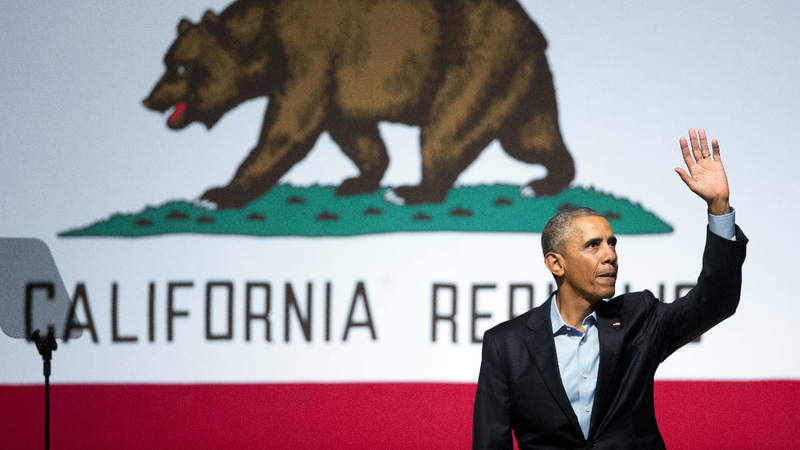 SAN FRANCISCO (KGO) -- President Obama joined Kanye West on at San Francisco's The Warfield for a DNC fundraiser. Even with a guaranteed general admission ticket, many people came out before the sun came up.

More crowds and security outside pic.twitter.com/zOzZlM8MHR

"Throwing in Kanye West and Obama together I thought that would be pretty interesting," said Soren Steelquist, University of San Francisco Junior.

"I was at the inauguration in 2008 and this is kind of the pinnacle," Wanda Ellison Crockett, who also came out to the event.

The duo may have been unlikely in years past as President Obama once had some choice words for the performer. But once the President's motorcade rolled in and he took to the stage, he had some friendly advice for Kanye.

"Saying you have a beautiful dark twisted fantasy. That's what is known as 'off message' in politics, you can't say something like that," joked Obama.

Obama got some of his loudest applause when making the case for changes in the nation's gun laws. "We know we got to prevent the gun massacres that we see with growing frequency in this country. It's not normal," Obama said to the crowd.

The president told the 1,000-plus people attending the fundraiser in San Francisco that Republican candidates seeking to succeed him are painting a dismal picture for voters.

"There's almost no measure by which we're not better off than when I took office and when we started this process for change," he said. "But it does kind of make you wonder. Why are so many Republican politicians so down on America? Why are they so grumpy?"

The fundraising event opened with Oakland's Mayor and The Golden State Warriors.

Honored to welcome @POTUS to the Bay Area today alongside @StephenCurry30 of the World Champion @warriors. pic.twitter.com/VOAbVGB0FO

"Its not enough to be against things, we have to be FOR something." -- President @BarackObama, 10/10/15. pic.twitter.com/PQ2savHvLc

It closed with the concert by Kanye West.

Kanye and President Obama did not appear on stage together.

They tell me they are Kanye's dancers .. pic.twitter.com/BqxTRFZRIA

Outside members of the Fillmore Bay Area Media Group held an informational rally.

"We don't want Obama to come to San Francisco thinking everything is okay for the black community because it's not," said Majeid Crawford with the Fillmore Bay Area Media Group.

Protesters outside the Warfield pic.twitter.com/0ruB94tPOT

Tickets to the event ranged from $100 dollars for students to thousands for VIPs, who got to meet the President.

Obama was in California for four fundraisers, one in San Francisco and three in Los Angeles. Those attending the Democratic National Committee fundraiser paid between $250 and $10,000.

Obama has been using his fundraising speeches and many others these days to point to progress he said the country has made during the past seven years, including a drop in the unemployment rate and the addition of millions of people to the rolls of those with health insurance.

In Los Angeles, Obama attended his first fundraiser at the home of movie director J.J. Abrams. He then went to a fundraiser for the DNC where about 200 supporters contributed up $33,400. Jamie Foxx and his band performed before Obama spoke.

Obama returned to the gun issue near the close of his remarks at the DNC fundraiser in Los Angeles. He noted that he went to Oregon the day before to visit with families of those killed at the community college. Two more college shootings occurred on the same day. While some protested during his visit, Obama said he felt just as strongly that such shootings are not inevitable and that the public should encourage lawmakers to take on the gun issue.

At times on Saturday Obama referenced the GOP's struggles to find a replacement for House Speaker John Boehner. He said during his final Los Angeles fundraiser, which supporters paid up to $33,400 to attend, that even deeply conservative lawmakers are not considered ideologically pure enough.

"At this moment in history, the choices are stark and facts, evidence and values are on our side," he side. "And the other side has gone off the deep end."

The White House said that Obama called Turkish President President Recep Tayyip Erdogan to express his condolences for the twin explosions Saturday that killed at least 95 people attending a peace rally in Ankara.

Obama was scheduled to go to the San Diego area for golf on Sunday and Monday, then head back to Washington.

President Obama has arrived at the Warfield pic.twitter.com/mERyEDO4Cn