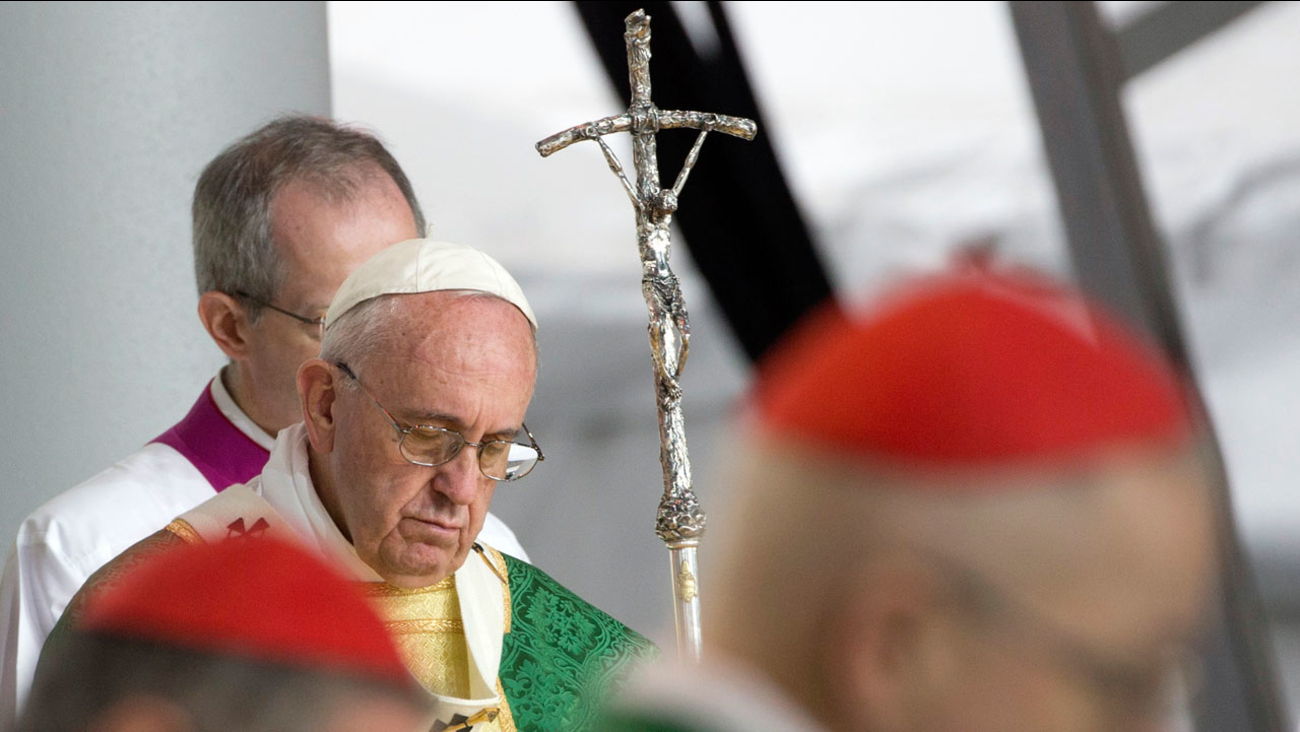 Pope Francis holds his pastoral staff during a Mass on the Benjamin Franklin Parkway, Sunday, Sept. 27, 2015, in Philadelphia. (AP/Alessandra Tarantino)

VATICAN CITY -- Pope Francis on Saturday scrapped his proposed tribunal to prosecute bishops who failed to protect their flocks from pedophile priests and instead established new legal procedures to remove them if the Vatican finds they were negligent.

The new procedures seek to answer long-standing demands by survivors of abuse that the Vatican hold bishops accountable for botching abuse cases. Victims have long accused bishops of covering up for pedophiles, moving rapists from parish to parish rather than reporting them to police - and suffering no consequences.

In the law, Francis acknowledged that the church's canonical code already allowed for a bishop to be removed for "grave reasons." But he said he wanted to precisely state that negligence, especially negligence in handling abuse cases, counts as one of those reasons that can cost a bishop his job.

Bishops "must undertake a particular diligence in protecting those who are the weakest among their flock," Francis wrote in the law, called a motu proprio.

The statute effectively does away with a proposal approved by Francis last year to establish an accountability tribunal inside the Congregation for the Doctrine of the Faith to hear negligence cases. Francis' sex abuse advisory board had recommended that the Congregation prosecute negligent bishops because it already oversees actual sex abuse cases against clergy.

But that proposal posed a host of legal and bureaucratic issues. In the end, Francis decided to streamline the procedure and task the four Vatican offices that already handle bishop issues to investigate and punish negligence cases.

As a result, the new procedures don't amount to any revolution in bishop accountability since those four offices already had the authority to investigate bishops for wrongdoing. The new law, though, specifically states that negligence in handling abuse cases is a cause for dismissal.

The main U.S. victims' group, SNAP, said it was "extraordinarily skeptical" that the new procedures would amount to any wave of dismissals since popes have always had the power to oust bishops but haven't wielded it.

"A 'process' is helpful only if it's used often enough to deter wrongdoing. We doubt this one will be," SNAP's David Clohessy said.

Marie Collins, a survivor of abuse who is a key member of Francis' abuse advisory board, said while it was "depressing" that the tribunal proposal had stalled for a year, the new procedures emphasizing negligence show that bishop accountability "has not been allowed to disappear into the sand."

"As a survivor, I am hoping the congregations involved will implement these new procedures as speedily as possible, as the success or failure of any initiative can only be judged on visible results," she said in an email to The Associated Press.

In the law, Francis said a bishop can be removed if his actions or omissions cause "grave harm" - physical, moral, spiritual or financial - to individuals or communities.

The bishop himself doesn't need to be morally guilty. It's enough if he is purely lacking in the diligence required of his office.

Any decision to remove the bishop must first be approved by the pope, who will be assisted by legal advisers, the law says.

The four offices now tasked with handling negligence investigations are the congregations that oversee diocesan bishops, bishops in mission territories, bishops who belong to Eastern rite churches and bishops who are members of religious orders.

Even before the new procedures were announced, two U.S. bishops who bungled abuse cases resigned on their own: Bishop Robert Finn in Kansas City-St. Joseph, Missouri, and Archbishop John Nienstedt in St. Paul and Minneapolis. They were presumably pressured by the Vatican to step down after civil authorities got involved.