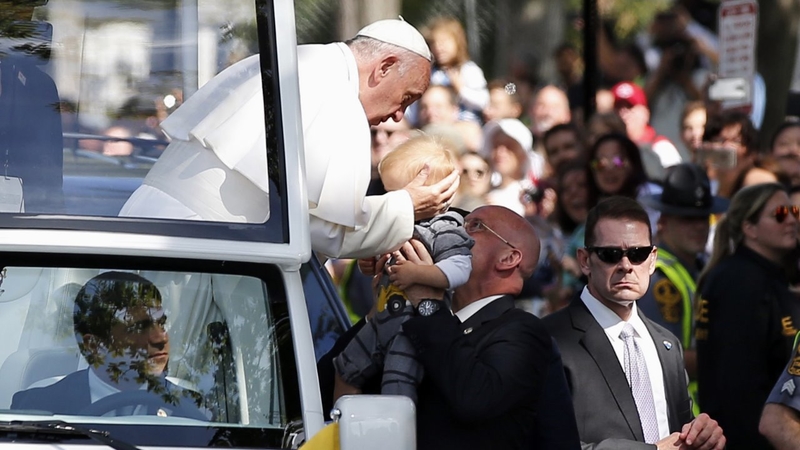 WASHINGTON -- Pope Francis called over several young children during a parade through Washington, D.C., Wednesday, that brought an enormous and excited crowd.

Thousands were lined up along the street to watch Pope Francis travel from the White House to Cathedral of St. Matthews the Apostle.

Pope Francis was riding in the popemobile -- a Jeep that was outfitted with a clear front protective screen.

At several points during the parade, children were carried over from the crowd to the pope, where he either hugged or kissed them.

Here's video of the pope kissing a baby:


The pope also hugged a young girl, Sophia Cruz. The 5-year-old traveled from Los Angeles to our nation's capital with her family and her church to see Pope Francis. She, along with thousands of others, waited on a crowded Constitution Avenue sidewalk for hours. It was the first papal parade of this historic U.S. trip for the pontiff and Sophia wanted to see the leader of her family's faith.

As Pope Francis made that turn onto Constitution Avenue in his popemobile, Sophia managed to get past the metal fence. The pint-size girl stepped into the roadway where she was met by towering figures of the secret service. At first they tried to stop Sophia but she made eye contact with the people's pope. What happened next shouldn't be a surprise. Pope Francis waved little Sophia over. She handed him the letter she wrote for him months ago and he blessed her.

Sophia was handed off back into the arms of her father Raul Cruz. Sophia said she doesn't remember what she wrote in that letter to the pope but she knows it made her feel "happy." Her father speaks little English but he said the holy experience made him "so happy, so excited."

Watch her meeting with the pope here: