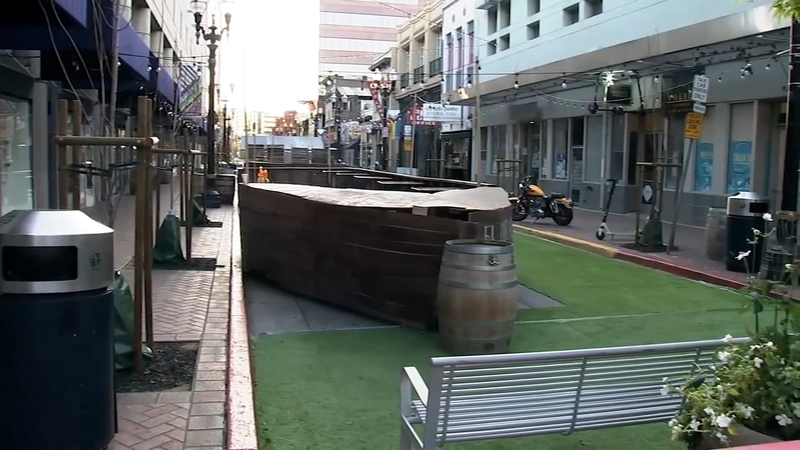 During the pandemic, the City of San Jose allowed businesses to expand temporarily onto Post Street for outdoor dining services.

While changes along Post Street were expected by business owners, patrons say they were caught off-guard and are disappointed to see the outdoor dining area go.

Barrels were being moved on Tuesday evening, marking the end of the good ship El Dorado 55.

For 55 South bar and lounge in Downtown San Jose, the 50-foot-long structure was built in the middle of Post Street and saw a 20-foot expansion during the COVID-19 pandemic.

"To be honest, 2020 was a shipwreck of a year," 55 South Managing Partner Eric Nielsen told ABC7 News. "So I was joking around with my partners, I thought it was really appropriate if we could get the street shutdown, that we would literally build a shipwreck in the street. And then it did, so we did!"

Nielsen said the "ship" fit about 14 tables, each spaced out the necessary 6-feet apart.

“It’s something that we were given from the city. So, we can’t be upset when it gets taken away.”

This stretch of Post St. in Downtown #SanJose is being cleared for the return of car traffic. #TONIGHT @CityofSanJose, biz owners and patrons weigh in.

Nielsen explained car traffic is expected to take over Friday, so in order to beat any bad weather, he and his crew spent much of the day Monday, taking down the ship.

By Tuesday, the stretch of Post Street, between Lightston Alley and First St. was nearly empty. It is soon-to-be cleared completely for the return of car traffic.

Councilman Raul Peralez explained the city didn't have "buy in" from all business owners on the block to keep the street closed.

"We did not want to do something that was going to continue to hinder business," Councilman Peralez told ABC7 News. "Especially as we're emerging out of the pandemic and hoping to get back to some sense of normalcy."

He continued, "One of the things we can be certain of is uncertainty in this pandemic. That's just been the case- we'll be going on two years this March. At the same time though, what we have learned is how to adapt and how to be able to live within the confines of this pandemic."

For Froylan Rodriguez, owner of Dream Jewelers, he explained the pandemic has been a nightmare.

RELATED: Permanent outdoor dining parklets in SF? Why not everyone is on board
EMBED More News Videos

Parklets have popped up by the thousands in San Francisco -- A temporary solution to pandemic dining, that is now up for permanent discussion.

"Because of this street closure, I had enough customers call in and say, 'We can't go because the street is closed. We don't know where to park,'" he said. "And it's terrible."

Since 1996, Rodriguez said he's depended on both foot and car traffic along Post Street.

Still, some patrons and business owners said because of where we are in this pandemic, timing is making this decision tough.

"I do understand that some of the businesses have good reasons for wanting cars back, and I definitely want to respect that," San Jose resident Ryan Globus said. "But with omicron surging, you know, it's really a big punch for the bars and the restaurants on this street."

Nielsen commended the city for allowing many small business to continue outdoors, and for providing the tool of Post Street.

However, he did acknowledge how the reopening will impact 55 South.

"We had more seats available when we had the street, than we have indoors," he explained. "So, it's going to cut our capacity by more than 50%."

Nielsen added, "It's something that we were given from the city. So, we can't be upset when it gets taken away."

Councilman Peralez shared, "This has been in motion for quite some time. We couldn't have predicted what was happening right now with this latest surge."

Nielsen called the move bittersweet. "The sweet part of it is- hopefully that means that we're returning to normal."

For Globus, who frequents the stretch of Post Street in what's also known as San Jose's Qmunity District, said that regardless of the pandemic, the area provided a really welcoming, safe, exciting and fun place to hang out.

"I think the biggest piece was all the people that would be out here during the day or in the evenings. It really sort of creates an x-factor, something extra special about the space," Globus continued. "Compared to when it's a lot quieter."

He told ABC7 News, he felt the decision to reopen the street to traffic was made with only business owners in mind.

"Of course, they should be talking to the businesses- they're very important stakeholders, but they're not the only stakeholders," Globus added. "There is the community, there's the public, this is a public street. And there should be a more open public process to get input on what we want this street to be."

Speaking specifically about the growing Qmunity District, Globus pointed out, "There's very few LGBTQ spaces in the South Bay and in San Jose. So, I think it's really important that we listen to that community when we make decisions like this, and we try to keep alive those spaces."

Councilman Peralez said there is hope for the potential of a hybrid street closure in the future. Although there are no actionable items as of now.

Until then, it's about keeping small businesses afloat.

RELATED: 'Numbers are doubling per week': COVID cases increasing after the holidays

"If we're decent neighbors, the only thing we can do is try to be equitable," Nielsen told ABC7 News. "To try to make sure that they survive, right? Rising tide raises all boats. So, hopefully we're one of those boats."

"The City of San Jose has been working with our local business community to help them survive the impact of the COVID pandemic, which is obviously not over yet. One of the City's efforts was to help businesses operate outdoors, which we started when indoor operations were closed by public health orders. We temporarily changed sidewalk, parking space and private space ordinances to allow restaurant, bar and other business operations outdoors, and the street closures on Post Street, San Pedro Street and Coronado Avenue were part of that effort.
Stakeholder discussions with the businesses on Post Street led to an agreement that Post Street would remain closed until the beginning of the year and we will continue to work with the merchants there to provide opportunities for outdoor operation, if not full-time street closure, so that we can ideally meet the needs of all the businesses on the street."