What do you get when you combine ramen noodles and birria? 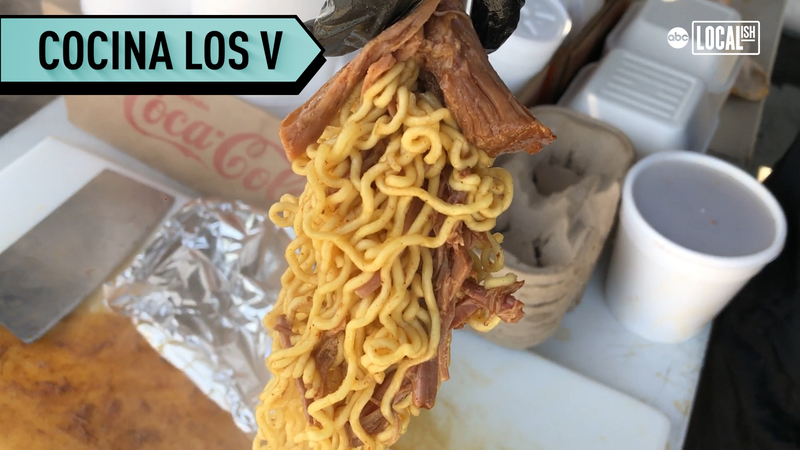 "The noodles itself really soaks up the consume (broth) which has a ton of condiments, a ton of flavor, and it just really just absorbs it. And then you get a chunk of the meat, and it just kind of all melts in your mouth, and just it creates a perfect blend," said Miguel Velasquez, owner of Cocina Los V.

The idea to sell this mashup of the Mexican beef stew and noodles started as an experiment.

"It's funny. We're doing our thing. We're here at the stand. And we started experimenting, and customers were in line ordering. And they saw what we were doing in the back end. They're like, 'hey, what is that? Can I have one of those?' Like, we're barely experimenting, and all of a sudden, people were already asking for it," said Velasquez.

The stand has been in business for about three years. Velasquez said what makes their birria extra special is the way it's cooked.

"I was fortunate enough to have this recipe for my mother. Which you know rest in peace. She left us a while back. But she left me that," said Velasquez.

And the birria ramen is a hit. The customer line sometimes wraps around the corner from where the food stand sets up.

"I've tried the noodles before with other things. But never with birria," said Maria Rojas, a customer of two years. "But we tried it and oh my... we came back for more. It's very good."

Cocina Los V sets up on the corner of Olympic Boulevard and Gage Avenue on Saturday and Sunday from 9 a.m. to 1 p.m.

"I'm just thankful and grateful for all of our customer support," said Velazquez. "I think a lot of our customers know what we try to bring to the table.