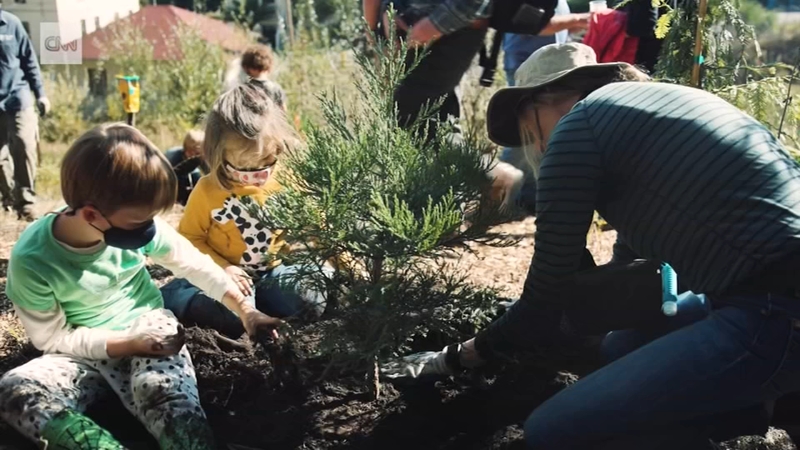 SAN FRANCISCO -- The San Francisco Bay Area is home to many tech giants. Twitter, Facebook, Google, to name just a few. 500 years ago the Bay Area was ruled by giants of a different kind, Redwoods.

Since they are an all-too-rare tourist attraction today, it can be hard to believe that giant Redwoods used to line hundreds of miles of the Northern California coast, living for more than 2,000 years as the tallest organisms on earth.

Now, David Milarch and his Archangel Ancient Tree Archive is trying to plant a new generation of giants. He takes clippings from the tops of the oldest and largest, some 400 feet tall, back to his lab in Copemish, Michigan. These specialists use a technique called micropropagation to grow them into saplings and he says from a single tree sample, the team of scientists can grow an unlimited number of clones.

The problem? How to get them all in the ground. That is where these little soldiers come in. They are tree-schoolers at the Cow Hollow School in San Francisco. You heard right, not pre, but tree-schoolers who attend outdoor classes to learn about ecology and sustainability at an early age by getting little hands dirty. "Today is a particularly important day because we're planting some very important trees which is why we have some very special volunteers," said Jean Fraser, CEO of Presidio Trust.

Keeping their focus is sometimes tough but when it is finally time to get down to it these budding foresters couldn't wait to dig in.

On this day, about a dozen Redwood trees made it into the soil, and the Presidio Trust's Steve Duffy says the Forestry Department plans to plant 100 more before the end of the year. "Growing up in the city can be kind of lacking as far as nature goes so to get kids out with native plants, with trees, that we can all work together, I think it's pretty special," said Duffy.

According to Save The Redwoods, more than 95% of the natural Redwood forests have been lost due to deforestation, wildfires, and climate change.
For Milarch, these plantings are just a start. He hopes someday to replant millions of Redwoods all around the world, using our littlest citizens to help sow the seeds for the biggest forms of life and a healthier planet.

"Recently we've been placing thousands and thousands of these redwoods in the Seattle area," said Milarch. "They're living in England, Wales, Ireland, New Zealand, Australia and British Colombia. Now the schools are calling saying we're going to need a heck of a lot more of these redwoods and sequoias because we want our school children reforesting up there. And don't be surprised in 10 years when you drive up, those trees in 10 years will be 30 or 40 feet tall."

As the proverb goes, "the best time to plant a tree was 20 years ago. The second-best time is now." The meaning may not dawn on these "tree-schoolers" quite yet but they are proof you're never too young, or too old, to have an impact and even the tiniest of hands can make a huge difference.

Milarch's message to the world: "I think the whole world needs that message of hope. And there's something each person on this earth can do to help reverse climate change. And there there's two dozen or so three- to four-year-olds here today that helped us do that. So, if a three- or four-year-old can do it, what's your excuse?"