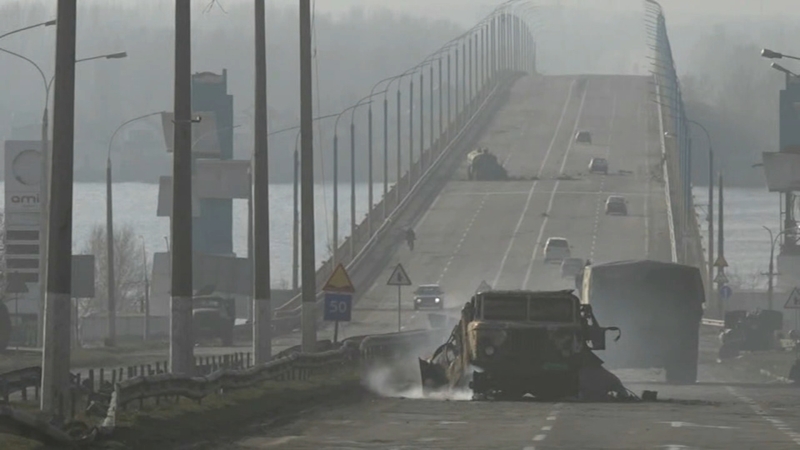 BERKELEY, Calif. (KGO) -- Nataliia Goshylyk calls loved ones twice a day, at least, to check in and make sure they are safe.

"No one is really okay right now, but at least they are trying to stay safe," she said. "They are in shelters, they are hiding in their basements, and they are just trying to find a safe place to spend the night."

Russian troops have moved into her hometown in Northwest Ukraine. She has cousins now fighting in the Ukraine defense. She says this is a fearful time for her.

"It is tough not knowing sometimes," she said. "My biggest fear is to wake up and not hear from my family and not know where they are."

She is currently a Fulbright scholar at UC Berkeley. She has plans to return to Ukraine in the summer, and hopes peace is restored by then. However, she and others fear this is only the beginning of other Russian attacks.

"This is a battlefront now in Ukraine, but it will be moving to other countries," said Yuriy Gorodnichenko, an economics professor at UC Berkeley who moved to Ukraine in the early 2000s.

He thinks the sanctions imposed by other countries are good long-term options, but they wont immediately stop the fighting, or stop Russian President Vladimir Putin's plans.

"Imagine your bank calls you and says we are going to cancel your credit card. It is inconvenient, but is it going to change your behavior in any fundamental way? Not really," he said.

The biggest sanction so far came Saturday. The U.S. and other nations cut off Russia from SWIFT - the international financial system that lets world banks send money to each other. Gorodnichenko says this could have the biggest financial impact on Russia.

"Removing Russia from SWIFT is a move in the right direction because we should not use the international financial system to fund war," he said.

However, both he and Goshylyk fear Putin will continue the invasion regardless of what other sanctions are imposed.

"It is very possible," Goshylyk said when asked about Russia invading other countries. "Belarus, Poland, the Baltic Nations, it is a scary time, and it can happen."