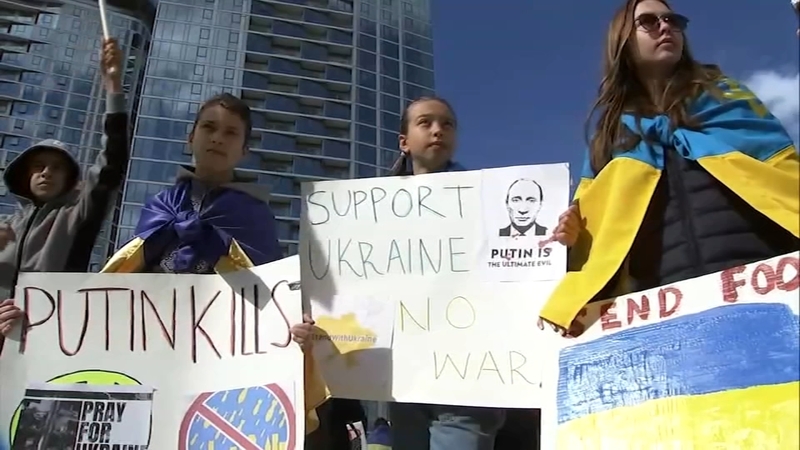 Bay Area continues to rally around Ukraine 1 month after invasion

SAN FRANCISCO (KGO) -- One month after the Russian invasion began, the streets of Ukraine are changed forever.

As the fighting has raged on over the past four weeks, millions have fled as refugees.

Those that remain putting up a fierce resistance have been backed by the U.S. and its allies.

"Putin was banking on NATO being split. NATO has never, never been more united than it is today," Biden said.

Biden stated that if Russia were to use chemical weapons against the Ukrainian people, NATO would respond.

The president also warned China of the economic consequences if it were to help Russia during the conflict.

"I made no threats, but I pointed out the number of American and foreign corporations that have left Russia as a consequence of their barbaric behavior," Biden said.

Back in the Bay Area, the outpouring of support for Ukraine continues. Many are left horrified by the images of the war's destruction.

"A lot of atrocities. Bombings of civilian infrastructure where refugees hide. It, it has to stop soon, and it's very clear that war crimes have been committed," said Igor Markov, the director of local nonprofit NOVA Ukraine.

Markov says the group is working hard, partnering with groups like UNICEF and Airbnb to help those both those still in the country and those fleeing to safety.

He says the bravery of the Ukrainian people has been inspiring.

And for those here in the Bay Area who wish to help, Markov says every little bit helps.

He urges people to get involved any way they can, not forgetting about the people of Ukraine.