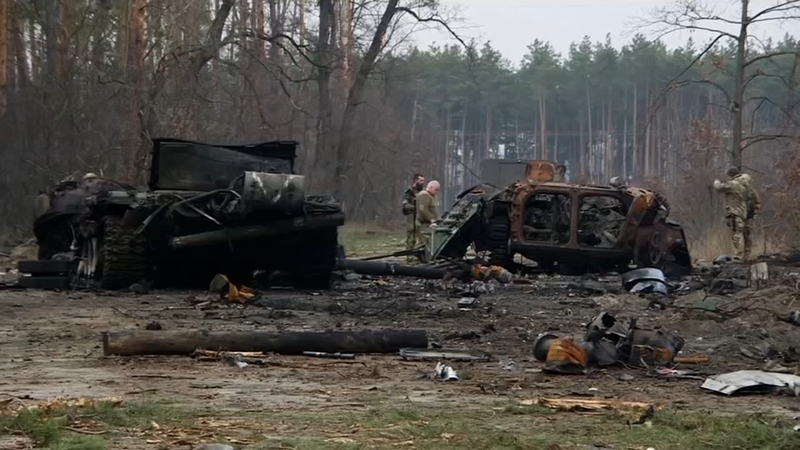 SAN FRANCISCO (KGO) -- A Bay Area woman who has dedicated her life to eradicating landmines is calling for more action. Monday marks International Day for Mine Awareness and, in the midst of war in Ukraine, her life's work is taking center stage.

Ukrainian President Volodymyr Zelenskyy had a grim warning for civilians Saturday morning, calling the situation "catastrophic," saying Russian troops are leaving behind deadly landmines as they pull back from around Kyiv.

It's enough to send shivers down the spine of Heidi Kuhn. The Marin County resident has dedicated her life to ridding the world of landmines, and children - she describes - are often the victims.

"The horrors of the mothers," said Kuhn. "To see their children, 'boom, boom, boom.' What are we going to do as humanity looks back and just watches," said Heidi Kuhn, founder and CEO of Roots of Peace. She started the nonprofit 25 years ago with a commitment to clearing mines, replacing them with vineyards and orchards worldwide.

"A quarter of a century later, I am still advocating the eradication of these deadly seeds of terror," said Kuhn, who traveled to Azerbaijan in February.

"The drums of war were just beginning in late February and I felt a responsibility to leave my home in comfortable Marin County and show what landmines do to innocent people around the world," said Kuhn, who detonated eight anti-tank mines in an effort to raise awareness.

"Now that's a defining moment walking into a minefield being a mother of four children and six grandchildren: 'Mrs. Kuhn, what is your blood type?'" she recalls being asked.

Kuhn is calling on the United Nations to do more on International Day for Mine Awareness on April 4.

"There are 17 sustainable development goals and I call for the 18th," said Kuhn. "The eradication of landmines worldwide."

EXCLUSIVE: Roots of Peace nonprofit desperately trying to get employees out of Afghanistan

Kuhn is returning to her own roots in Scotland for the day and will have one of her closest allies by her side, Daniel Yuval.

Yuval lost a leg to a land mine when he was 11 years old while playing in a snowball fight in Northern Israel. Now 22 years old, he's been advocating ever since.

"As someone who really stepped on a land mine and to let them understand how really difficult it is to face this kind of thing, I think my voice might be really powerful," said Yuval. "It was really hard to overcome this injury. It's not like it was after a year. You need to make a new life and learn to walk again and every morning is a challenge."

And he's been facing the challenge head-on going on to serve with the Israeli Army continuing to advocate. "I find the courage in me to do a lot of other things like the demining campaign and I think to get this understanding of what is life at such a young age gives me the feeling I can do anything."

Yuval is driven by the hope that someday children around the world will be able to play safely and freely. "I know how hard it is to deal with this kind of problem. It's really difficult and this is my main goal to make the world mine-free," he said.