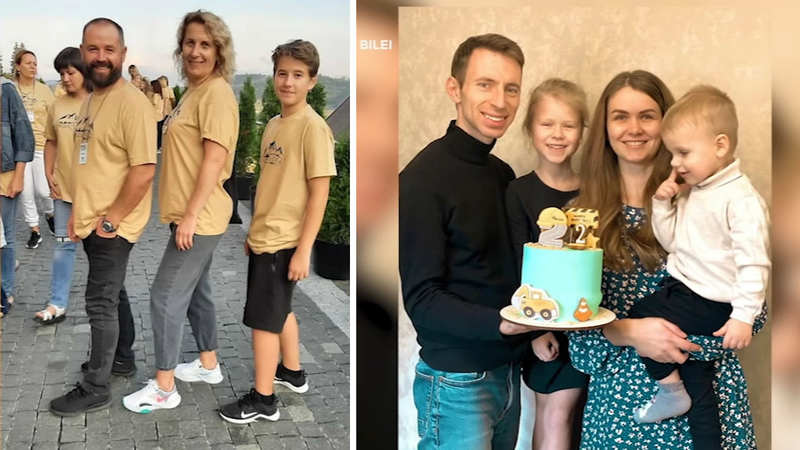 Ukrainian families stay back to fight for their country, home

SAN FRANCISCO (KGO) -- As night falls and Russian forces continue to press through major Ukrainian centers, civilians are arming themselves to protect their cities.

One of them is Iryna Rozlutska's husband. Six days ago he was a lawyer. Now, he is fighting for his country.

"He is patrolling. He is also waiting for another family that they will be allowing to stay in their house from the city," said Iryna Rozlutska.

With the help of a translator Iryna said they stayed back to fight for freedom. Their 15-year-old son is also armed but staying home.

"He knows where to shoot and what to do if something does happen," said Iryna Rozlutska.

A Bay Area man says his 83-year-old grandmother is ready to fight in Ukraine as Russian forces inch closer to Kyiv.

When we talked to Iryna she had only slept for two hours. Her lights were off and they were trying to stay quiet.

Their home located in the outskirts of the city of Odessa has also turned into a shelter for multiple families escaping gunfire in the city center.

"The government has advised us to make sure that is dark and there is not a whole lot of light. Therefore, when the satellites are looking over the city they are trying to see where people are and what's going on there is very minimal notification," said Iryna Rozlutska.

"Everybody is very nervous," said Roman Bilei, "A lot of our Ukrainian people don't want to kill Russian soldiers."

"We heard fighting jets and explosions and our daughter was crying and panicking when she heard these sounds. It was very scary," said Oksana Bilei and added, "I'm afraid for my kids. Their lives and future."

With tears in her eyes Iryna hopes her husband returns home safely as she prays for peace for Ukraine.

"I never wanted this. Always, always supported peace in my country but at this time such as this, if they have to shoot there is no choice. They were left with no choice other than to protect themselves and the people around them. They will if they have to," said Iryna Rozlutska.