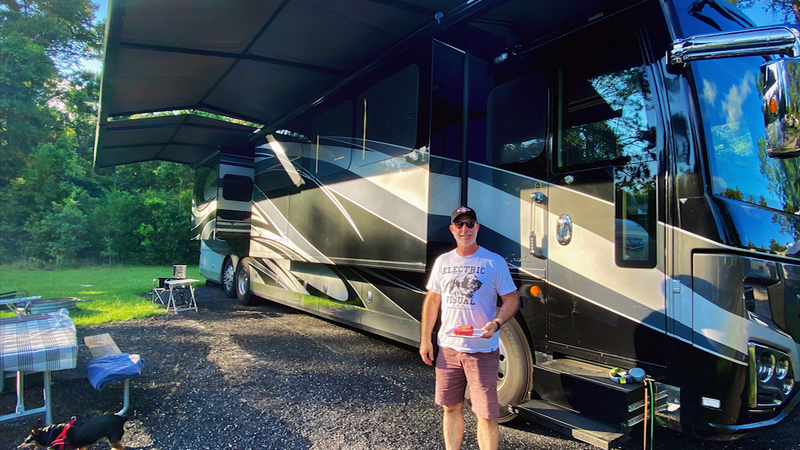 SANTA CLARA COUNTY, Calif. (KGO) -- Between sky-high housing prices in the Bay Area and COVID-19 wanderlust people are opting for homes on wheels such as RVs or trailers.

In fact, just as the pandemic hit the Bay Area, San Francisco native Mike Jennings sold his condo in the Mission and hit the road.

"With the COVID-19 occurring and a lot of people working from home now, it does cause a lot more people to say, 'why am I staying in the expensive Bay Area? Or why am I staying in this crowded city wherever it is in the country?'," Jennings said. "Moving into an RV allows you to do that. You can wake up and have a different view every day. You don't have the incredibly high cost of living. Just getting out of the craziness with the traffic and exploring nature, being in the trees or being close to water, that's just the best part of it right there. There's a lot of work. There are things that break down. There are problems that happened on the road. It's an adventure, we'd like to say, but it's been one that's been very worthwhile so far."

Many have moved to homes on wheels out of necessity and they park them along city streets across the Bay Area.

According to the 2019 Santa Clara County homeless census: the number of people staying in vehicles has increased 146% since 2015, reaching 3,655 individuals in 2019.

"18% of those surveyed in the homeless population reported living in vehicles, cars, RVs, which was an increase from previous years," Santa Clara County Office of Supportive Housing's Kathryn Kaminski said. "We're helping people find housing and remain stably housed more than ever, however, more people are entering our system, becoming homeless for the first time. So we know those economic pressures those economic hardships are increasing, rents are increasing, wages aren't keeping up with that and income inequities are greater than ever."

This change in lifestyle has led to a massive need for RVs with sales going through the roof.

At Family RV in Morgan Hill, their four acre lot is normally full of choices for buyers.

But the reality now? Empty after nearly their entire inventory was either sold or rented in the last two months.

This week on @abc7newsbayarea, we are looking at the housing shift happening in the Bay Area. Did you know that 18% of the homeless population reported in the @SCCgov homeless census live in vehicles such as RVs or cars? That’s up 146% since 2015. pic.twitter.com/1W77V5nfJj

"As the cost of housing in the Bay Area has increased, we've seen a definitely a large number of people who will come in and look at an RV as another way of getting out of town, but also securing housing for themselves," Family RV Owner and CEO John Kerley said. "We had about, between rentals and sales, we had over 200 units and now they're all gone. Most of our reservations now are booked online. We have a hospital-grade sterilization system that goes in to sterilize them and then no one is allowed to go into the RV until the actual customer comes in to pick them up. It's not just the low-income spectrum, it's the higher end as well. As people sell their homes, they can go live in an RV for a period of time. It's another way. It's really the whole economic spectrum and we've seen the increase in both."

It’s not just people finding housing on wheels for necessity. Call it COVID-19 wanderlust or just a need for a change in scenery from the expensive Bay Area, but RVs are increasingly popular. @familyrv in Morgan Hill sold out nearly their entire inventory in the last 2 months! pic.twitter.com/y5UxqmGJUx

So whether it's that chase for adventure or just finding a way to survive, life on wheels may be a way of the future in the Bay Area.